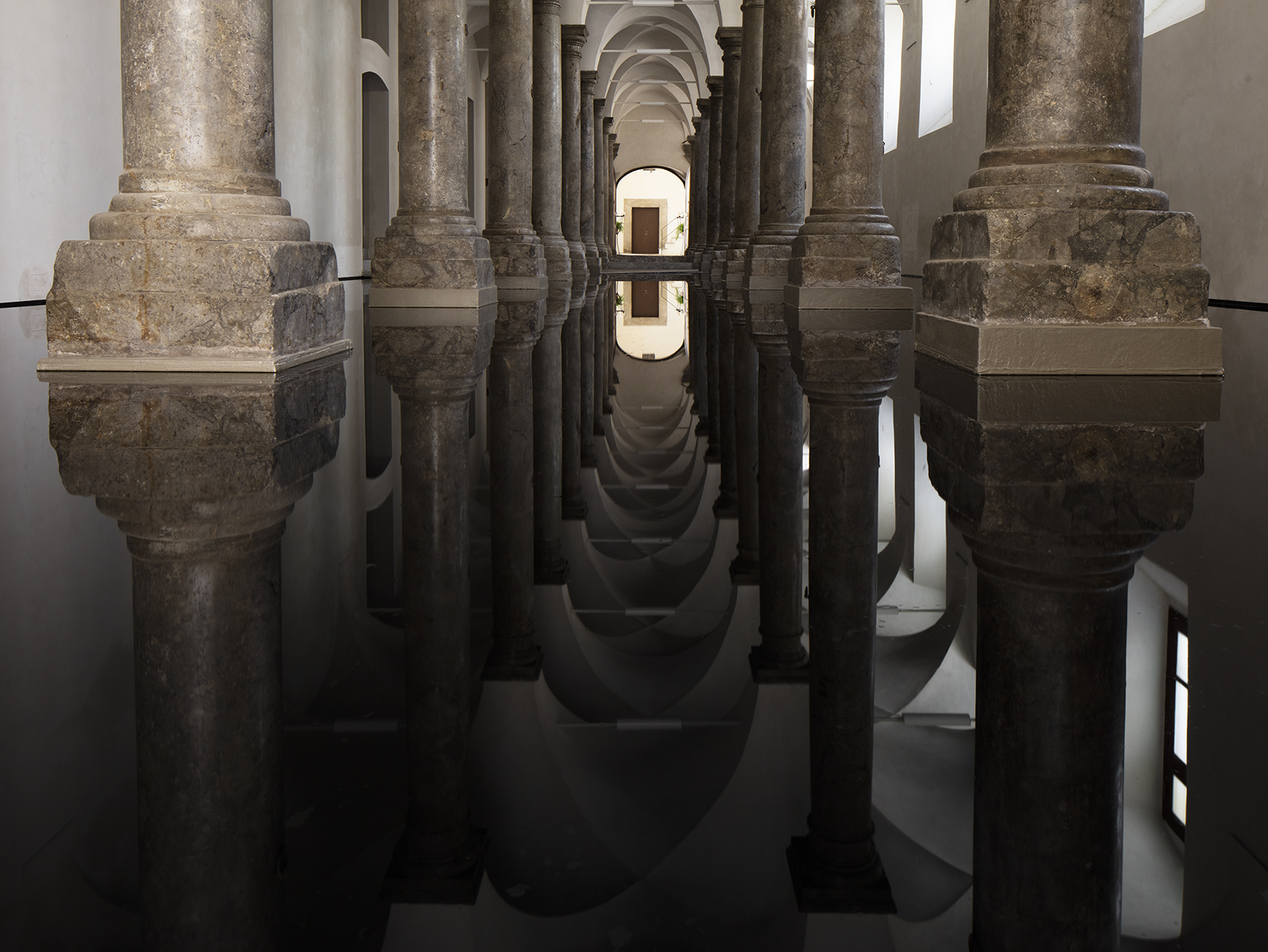 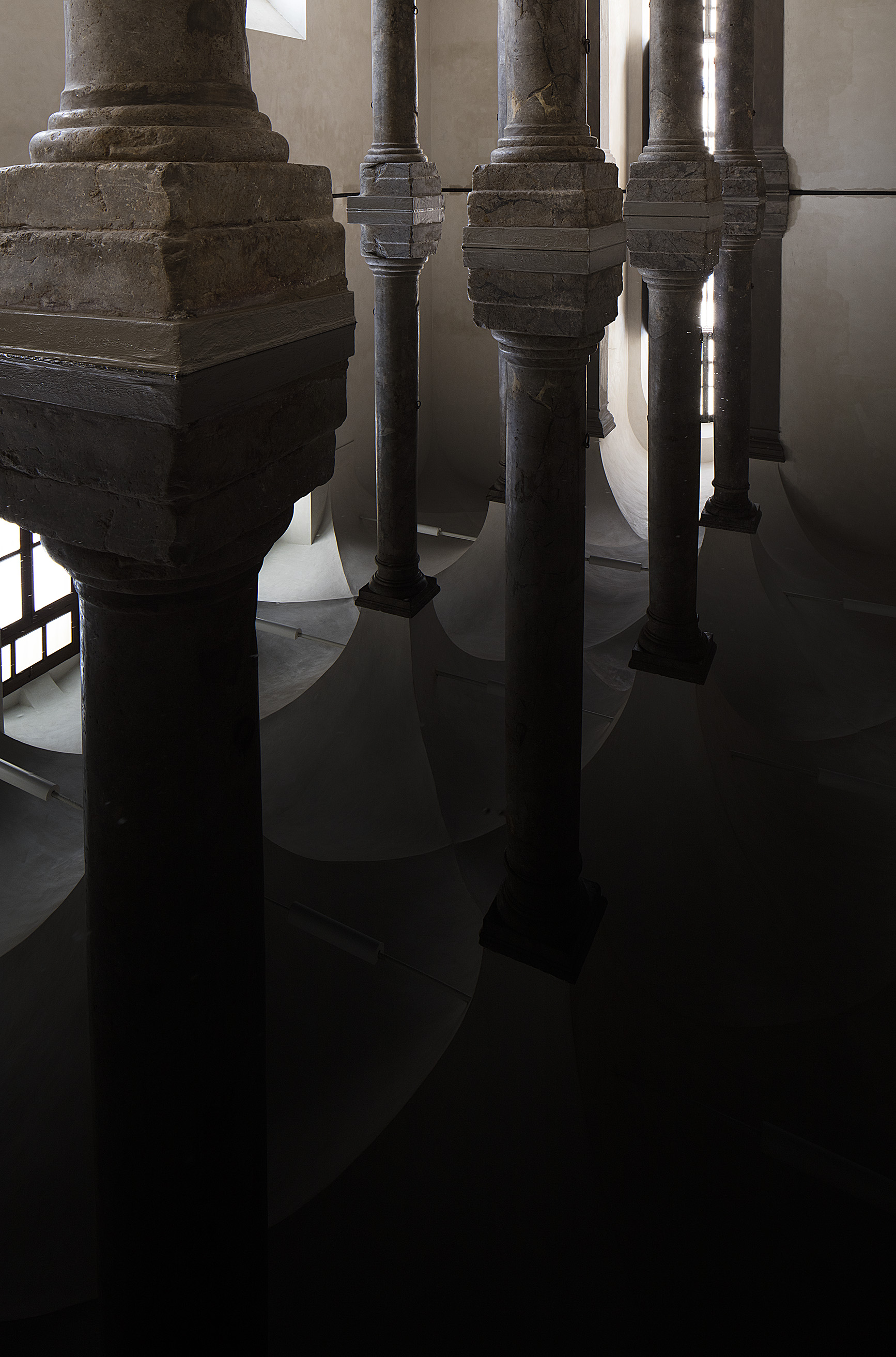 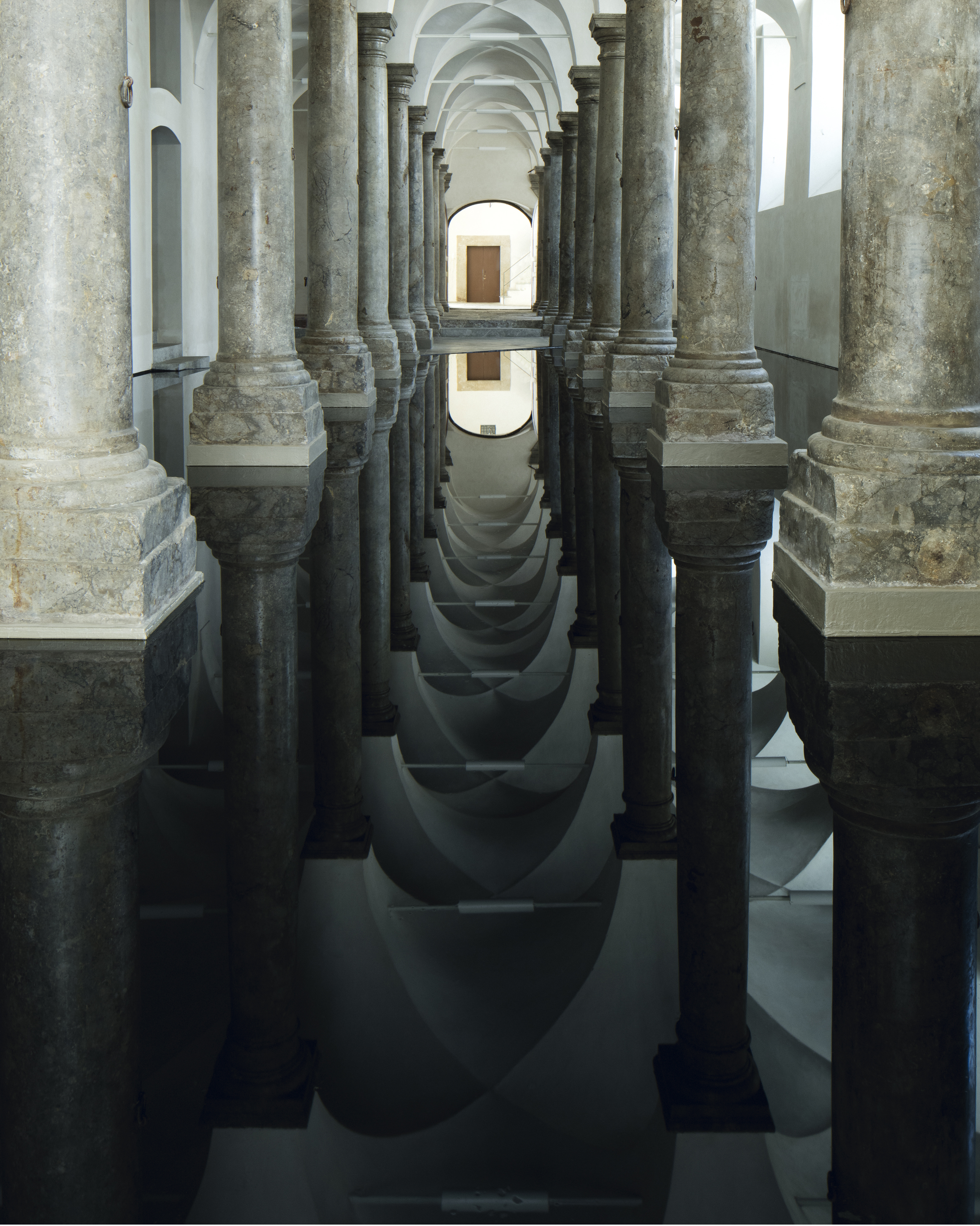 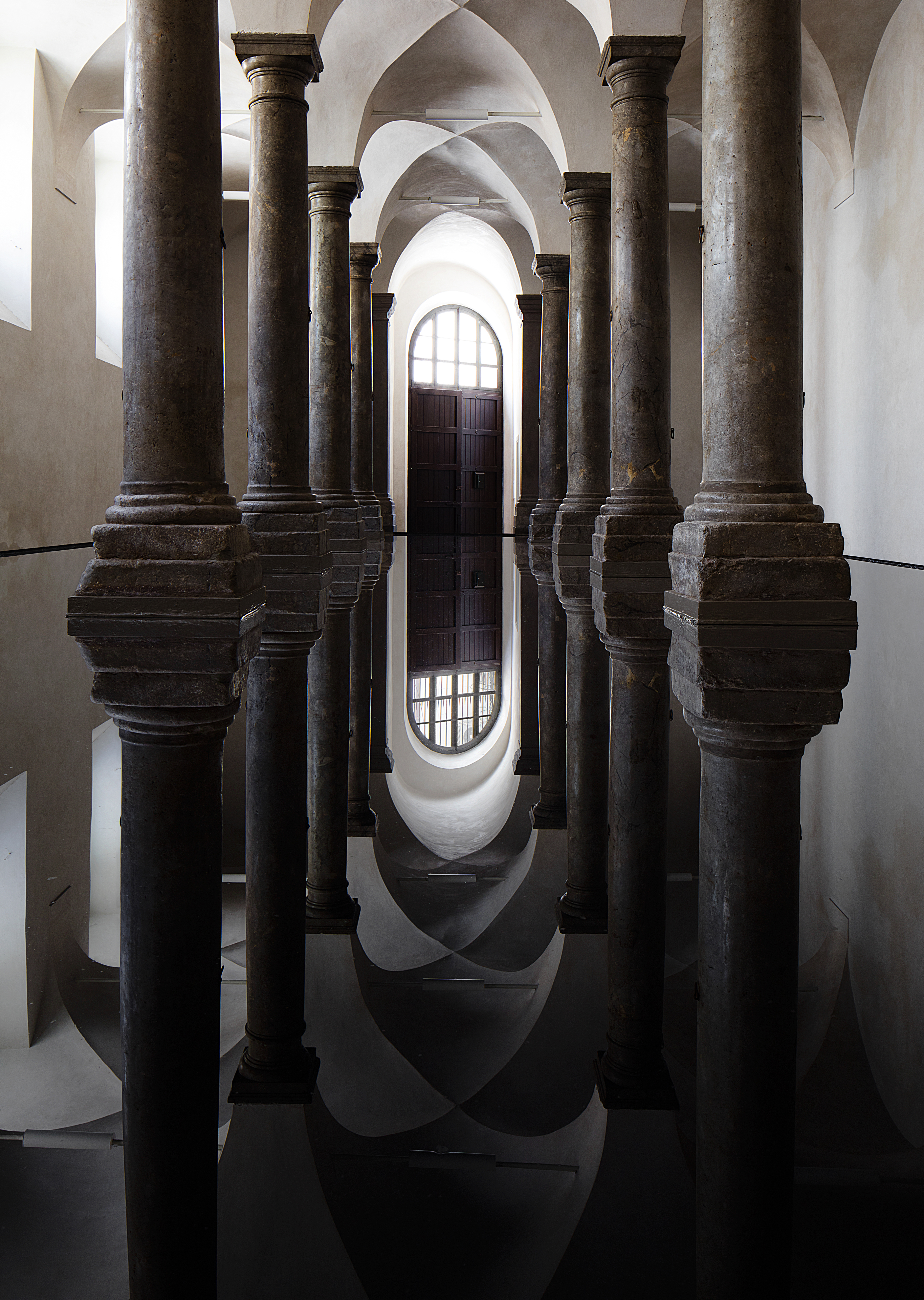 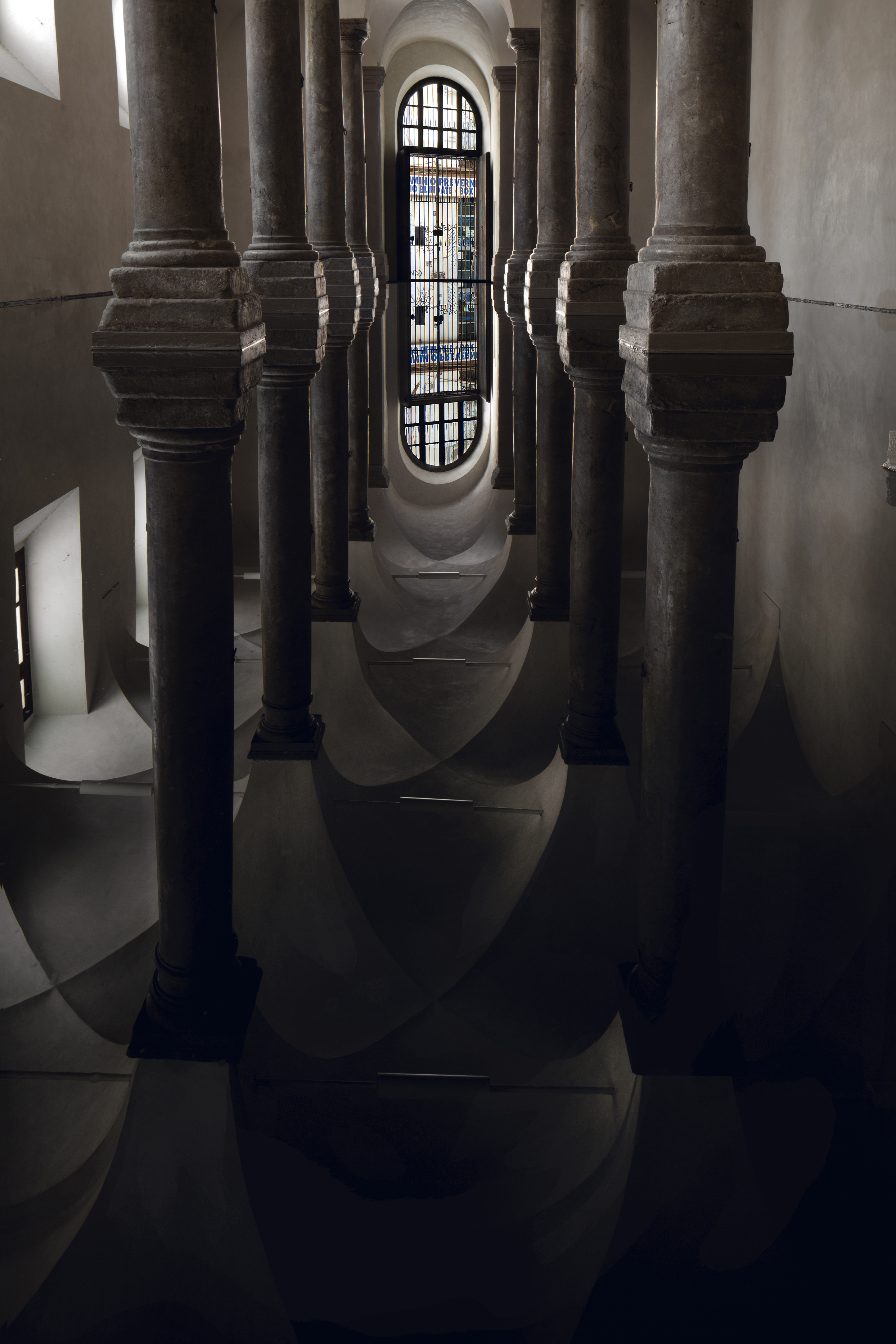 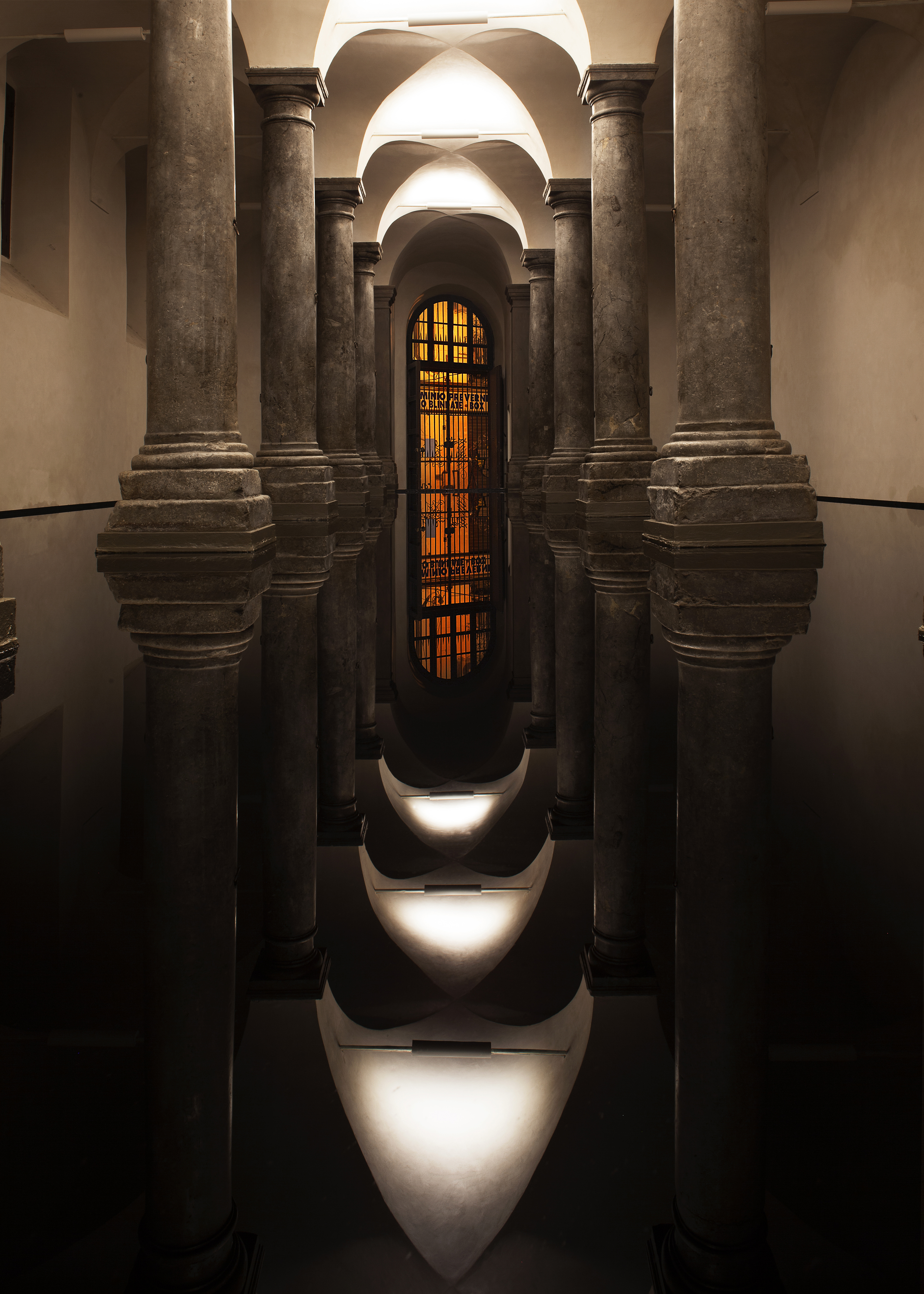 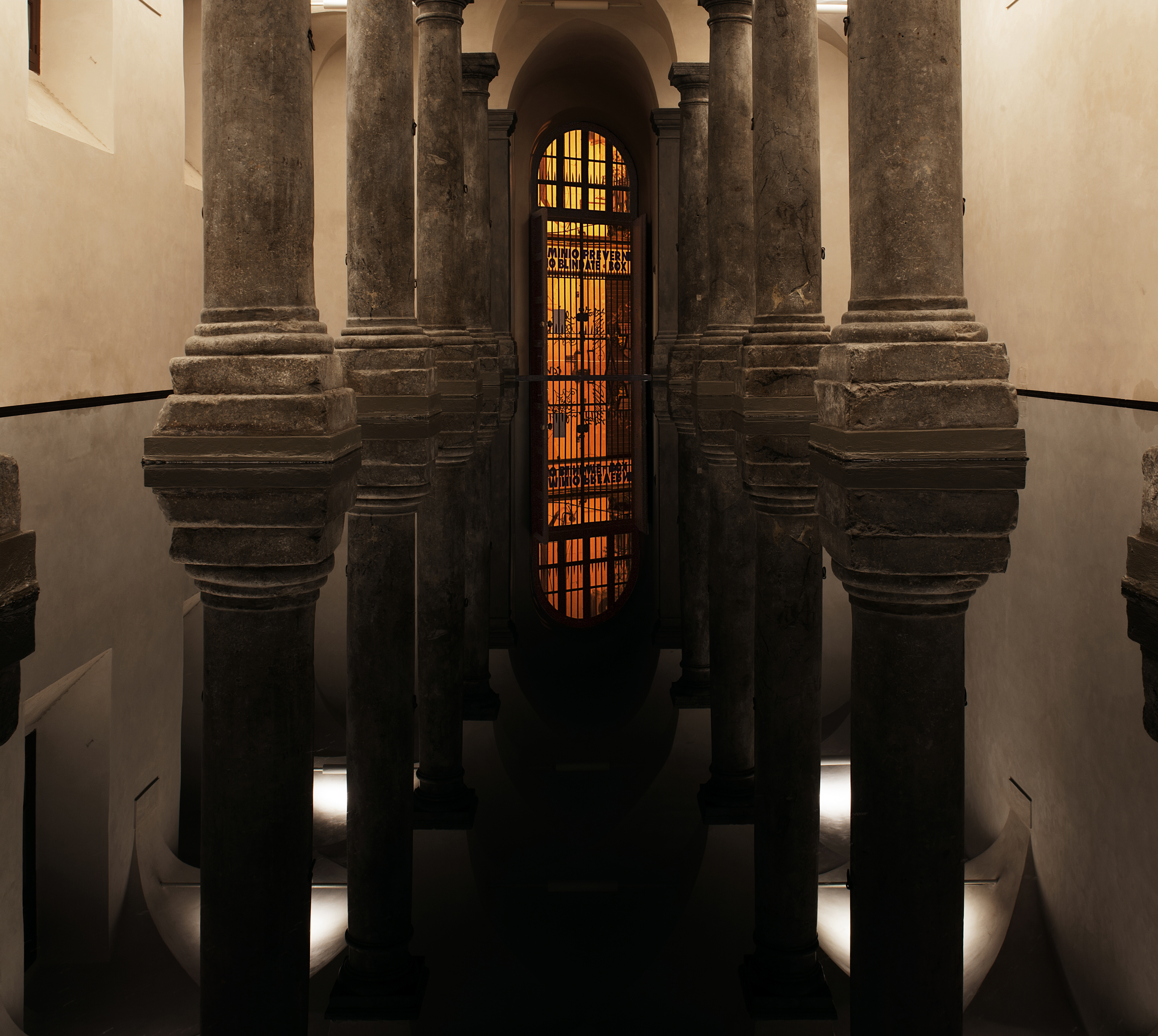 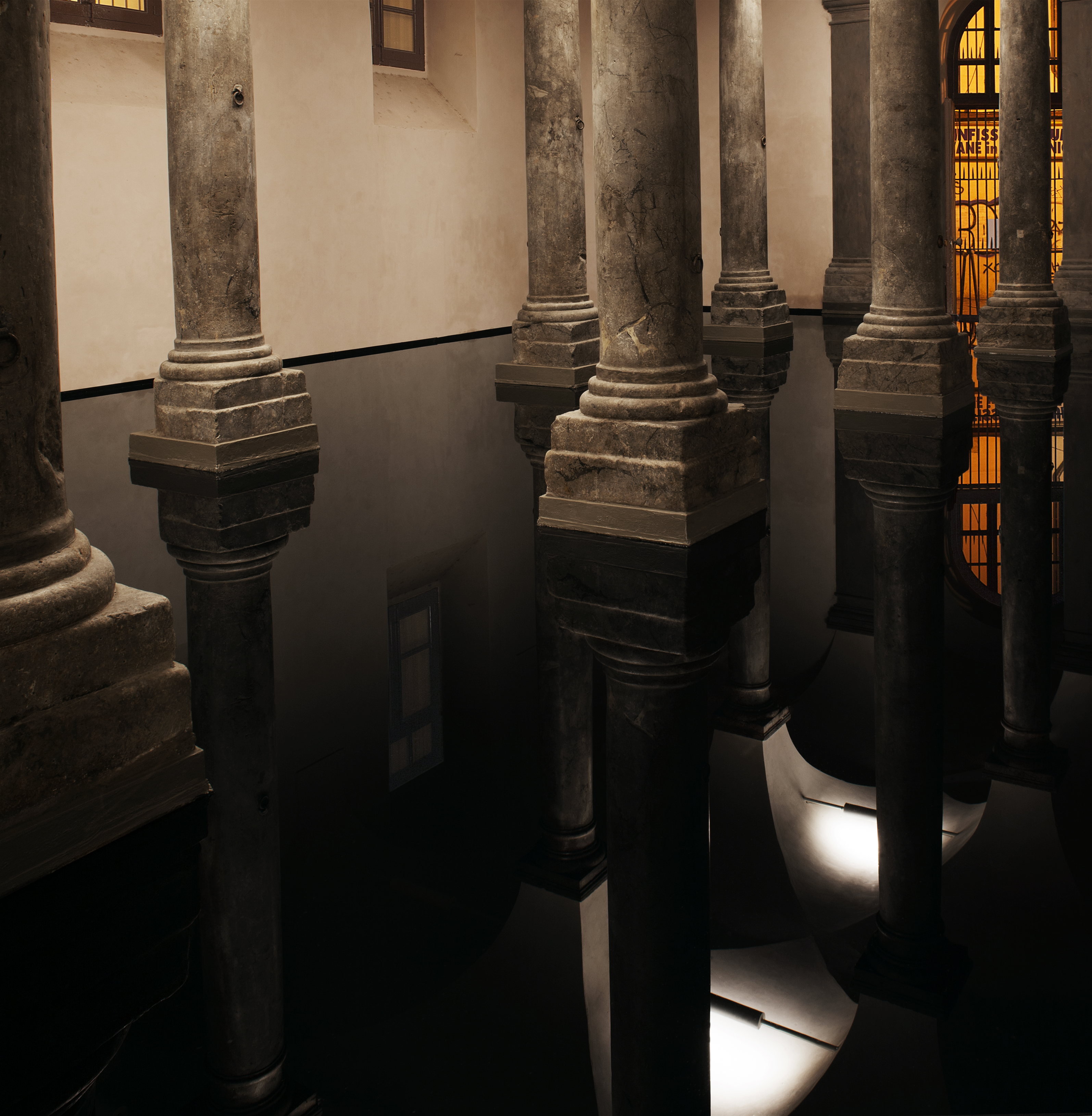 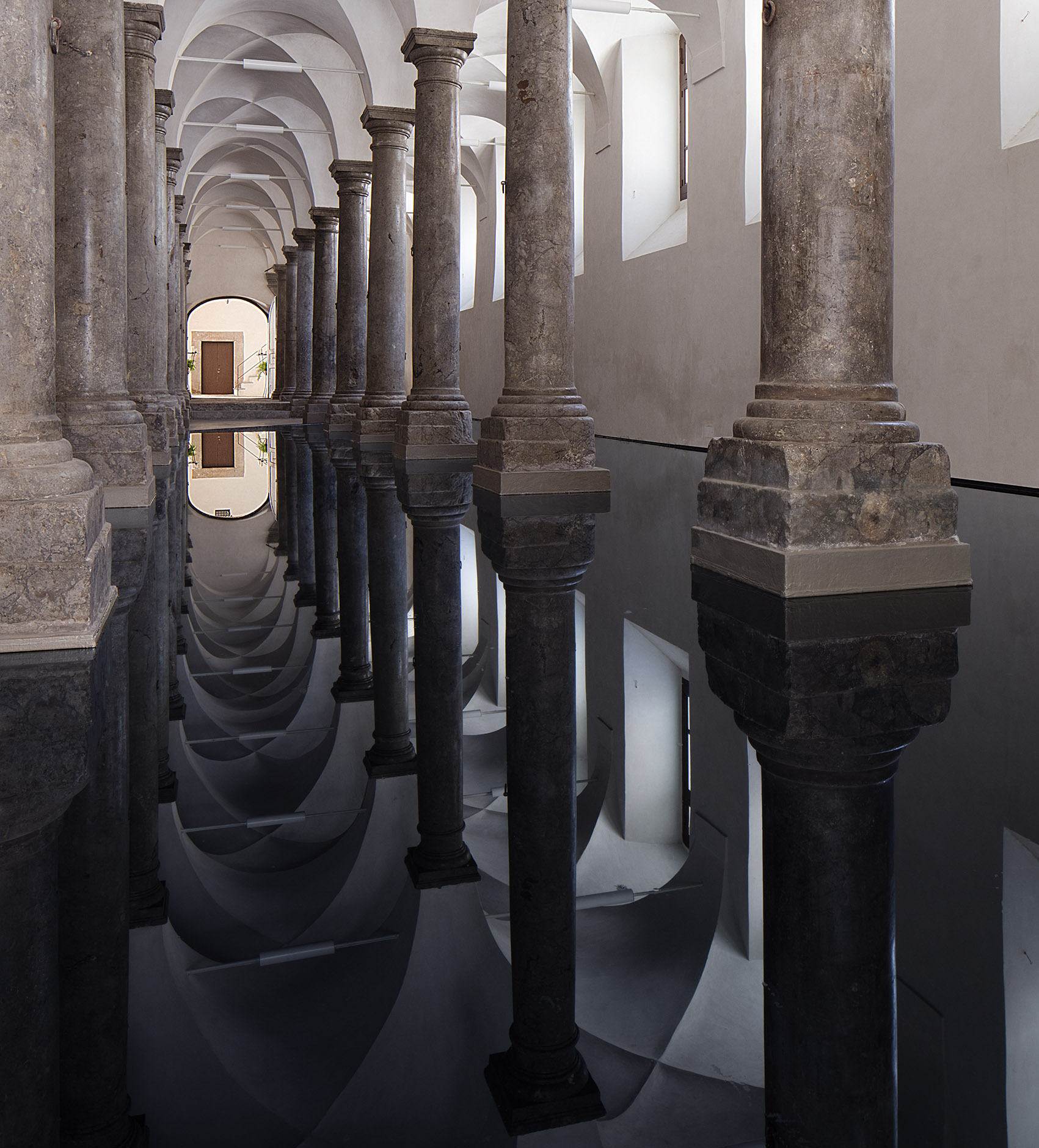 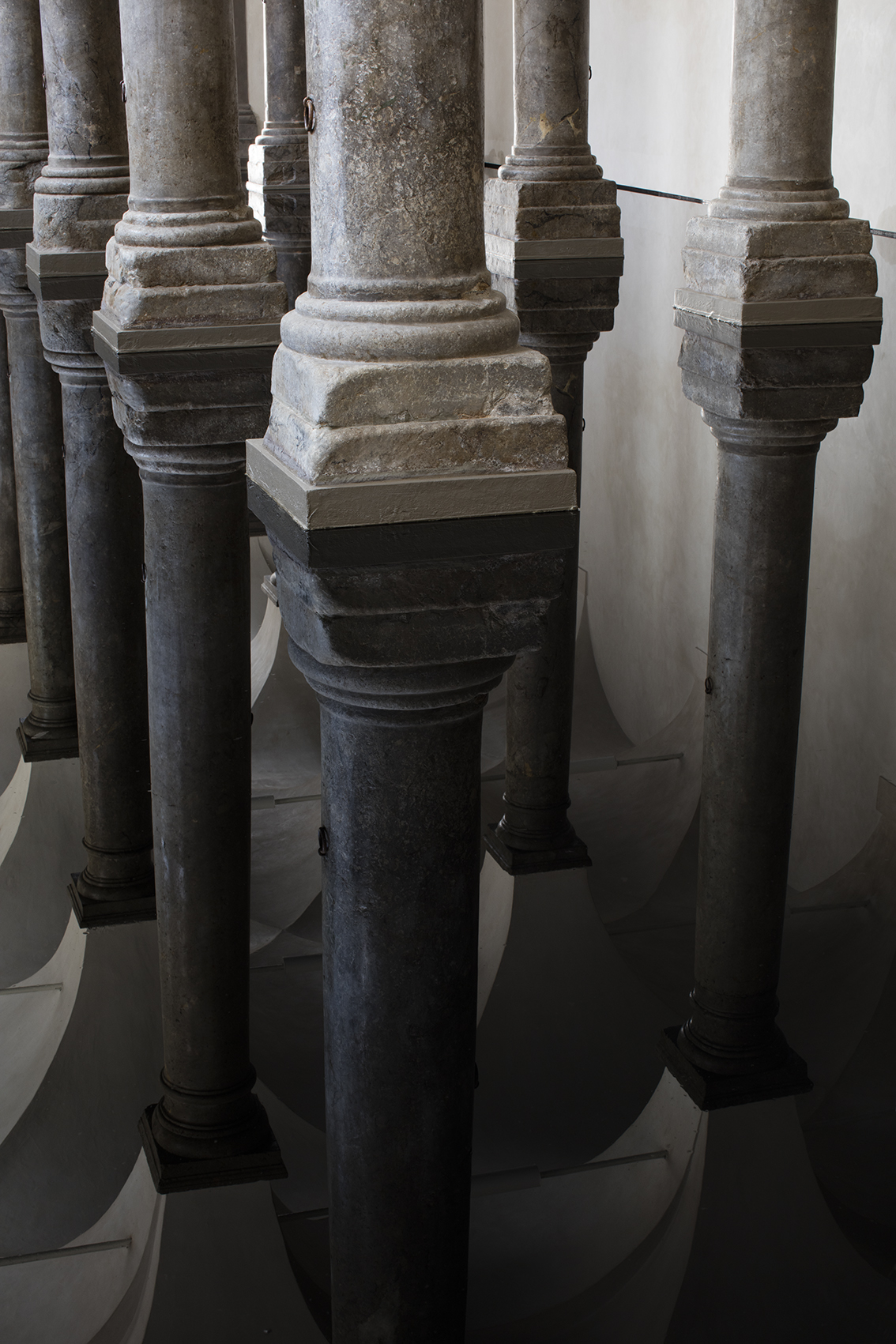 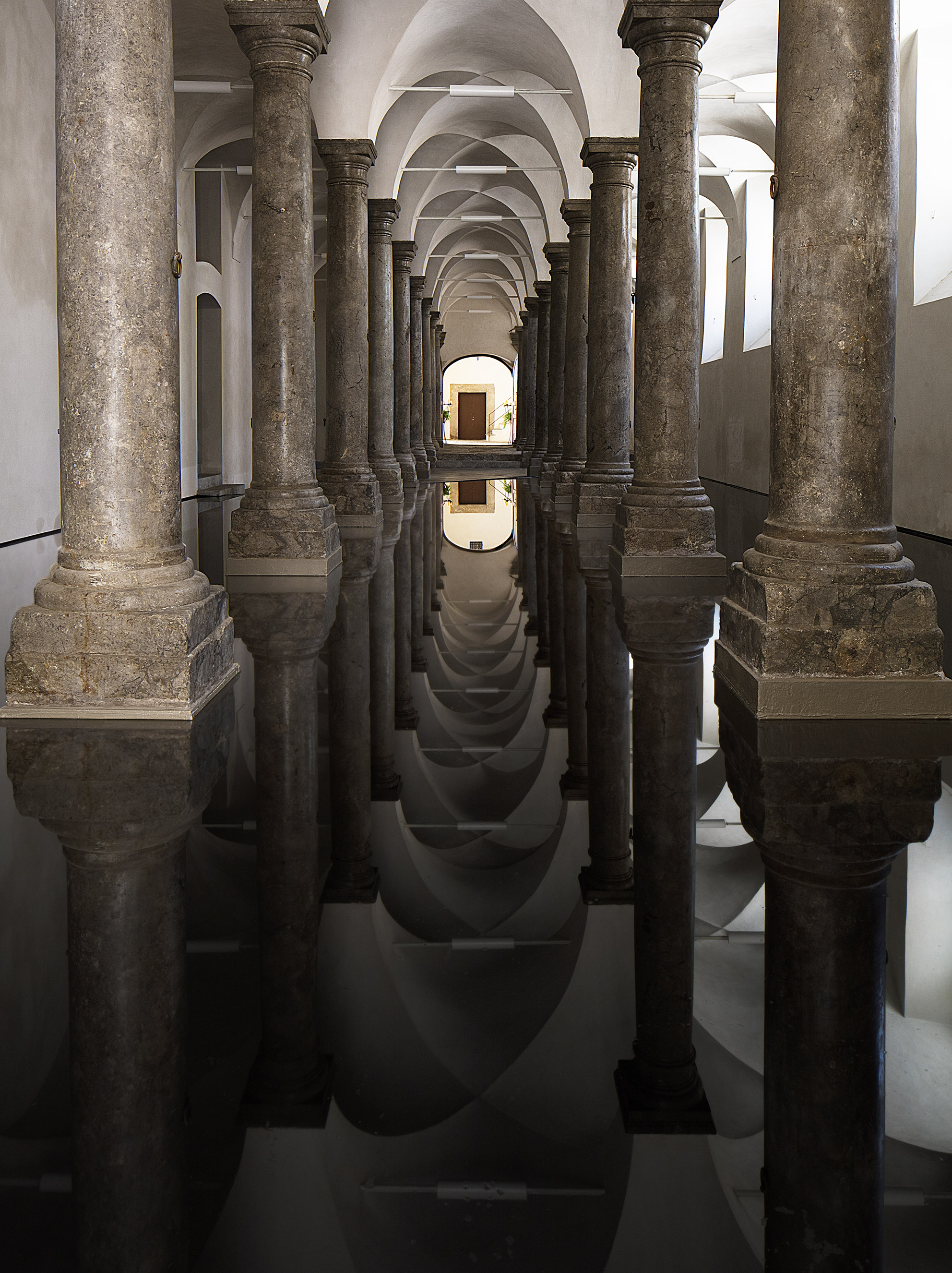 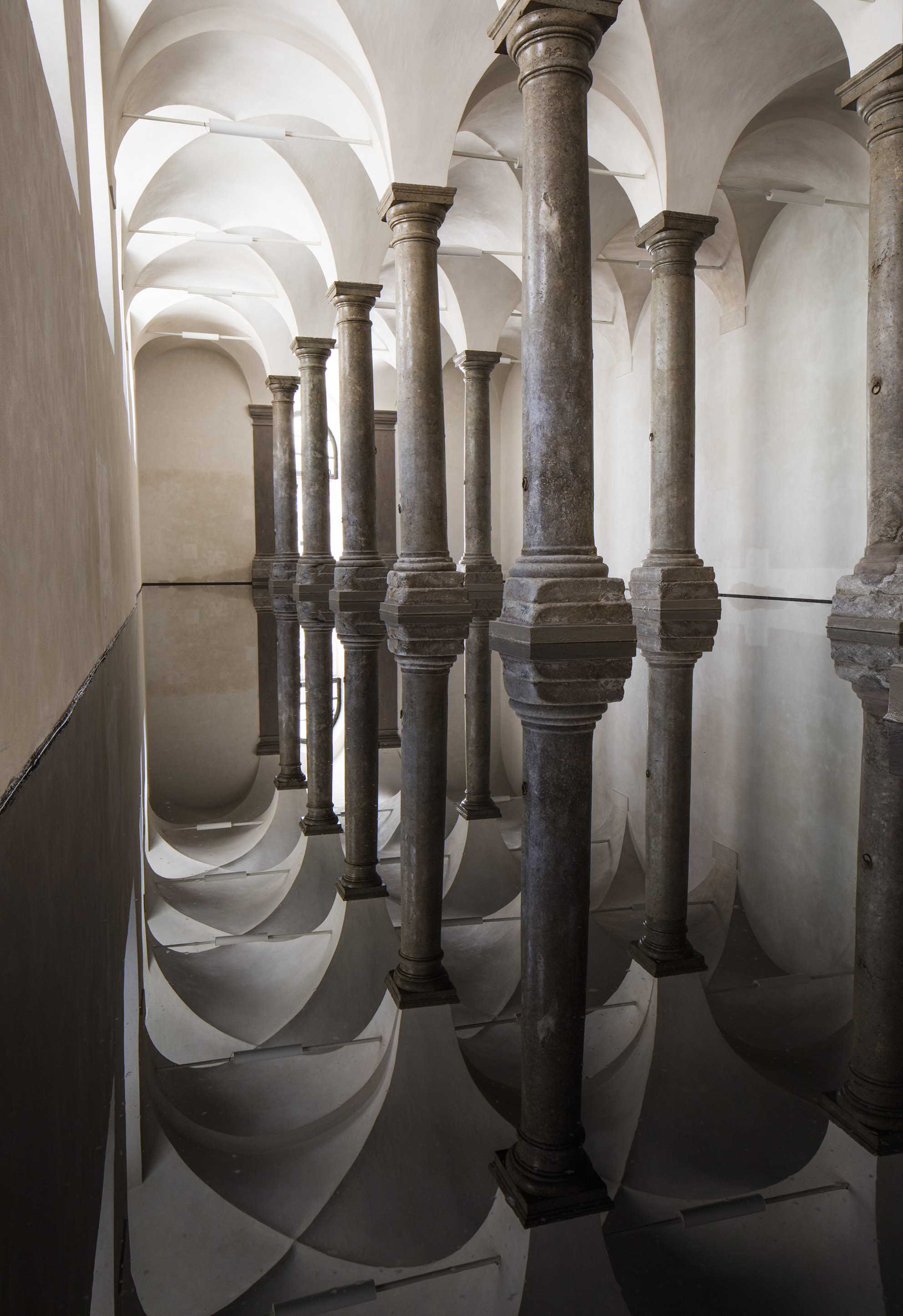 The Sense of Faithfulness

If we had to provide a demonstration of equivalence – in accordance with the intentions of Ernst H. Gombrich (Art and illusion, New York/London 1960) – so as to consider how much the images produced by the arts can be compelling even if they don’t reflect the depicted reality so closely, we could certainly assert that, in the case of Per Barclay’s works, the face of illusion is as true as reality itself.
Per Barclay’s artwork mainly moves around two perceptive structures, which are both characterized by a highly aesthetic consistency. There is no discordance between the subject and its representation, because there exists a perfect continuity of perception between them, that it’s similar to an echo.
In the oil chamber he created for the “Cavallerizza“, the historical stables of Palazzo Mazzarino in Palermo, the artist once again allows the dynamic force of space to characterize the perception of reality by replicating it. Crossing optical boundaries becomes a generative action and the act of “showing” has a huge creative power in itself, which in fact is even capable of making illusions appear as real.
So, both in the big metal tub installation and in the ensuing photographic rendering, the columns are real, the vaults and archs are real, as well as all the other architectural elements that offer a faithful representation of themselves, even though they’re replicated in their glassy reflection.
There is nothing counterposed between reality and its representation – the original scene is always maintained, both content and shape are untouched, nothing has been lost.
Per Barclay’s work is defined by a deep “sense of faithfulness” because his perspective suggests the same experience of the depicted reality – while time passes by, the light stays unchanged, as well as dimensions, the layout and even the substance.
Crossing the boundary of the visible through reflection is not undermining the adherence to the truth, but it simply sublimates it.
An outstanding elegance of thought, which is an intimate need in Barclay’s works, connotes the love for the beautiful that causes the viewer to be lost in contemplation of a both scenographic and oneiric context, where every visual sensation can be a discovery, an intuition, an association, a possible speculation over reality.
The viewer learns to react subjectively to the scene; the artwork acquires generative powers and ends up providing extensive evidence of its capability to describe the space with a different awareness, which is perhaps even better at every glance, but undoubtedly not subject to any constraint.
After a careful observation of the scene, you’ll fancy living the life of the places described by Barclay; at times you can also recall personal experiences, you can identify yourself with this space as if it was familiar to you; you can even see the people who livened up such places, their stories; maybe you can also feel, like in this case, the pungent odor or the noble sound of neighing horses that have just returned to the Stables of Palazzo Mazzarino: you can revive the spirit of Palermo, a faraway, maybe lost, but yet so vibrant city.
When you let your eye linger on the scene, you’ll constantly share the artist’s glance, you will penetrate into his will and make it stronger, equipping it with a new and vital narrative power.
The strength of Per Barclay’s language goes beyond the wide range of geographical, environmental and architectural contexts that he chooses as subjects of his works – it is made of what I have always perceived as a magic, namely the ability to transform, to build a truth that rejects triviality, to suspend the judgment, to stimulate the imagination, to undermine all certainty, to rewrite the concept of meaning, which itself is a wonderful reality.