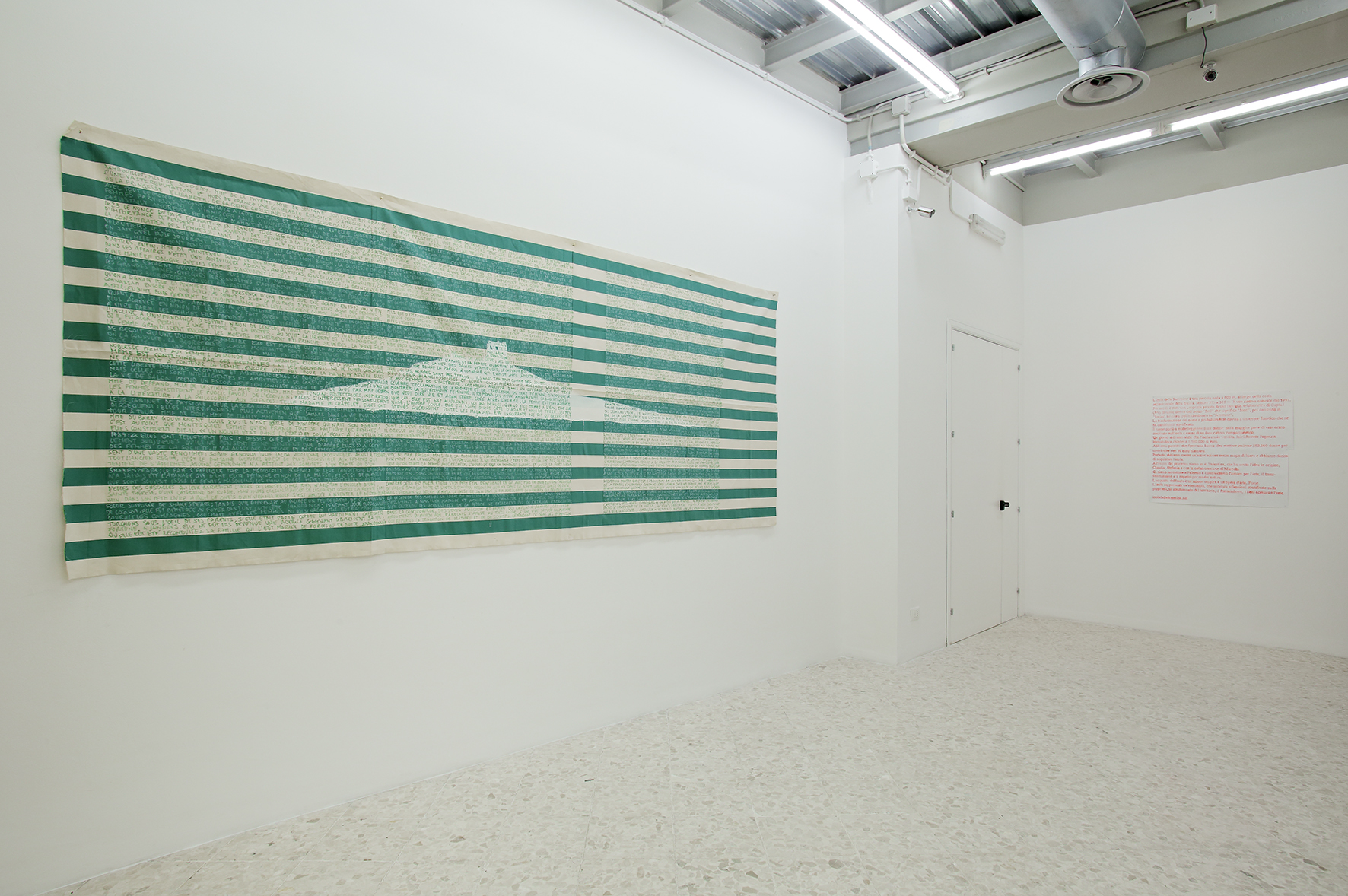 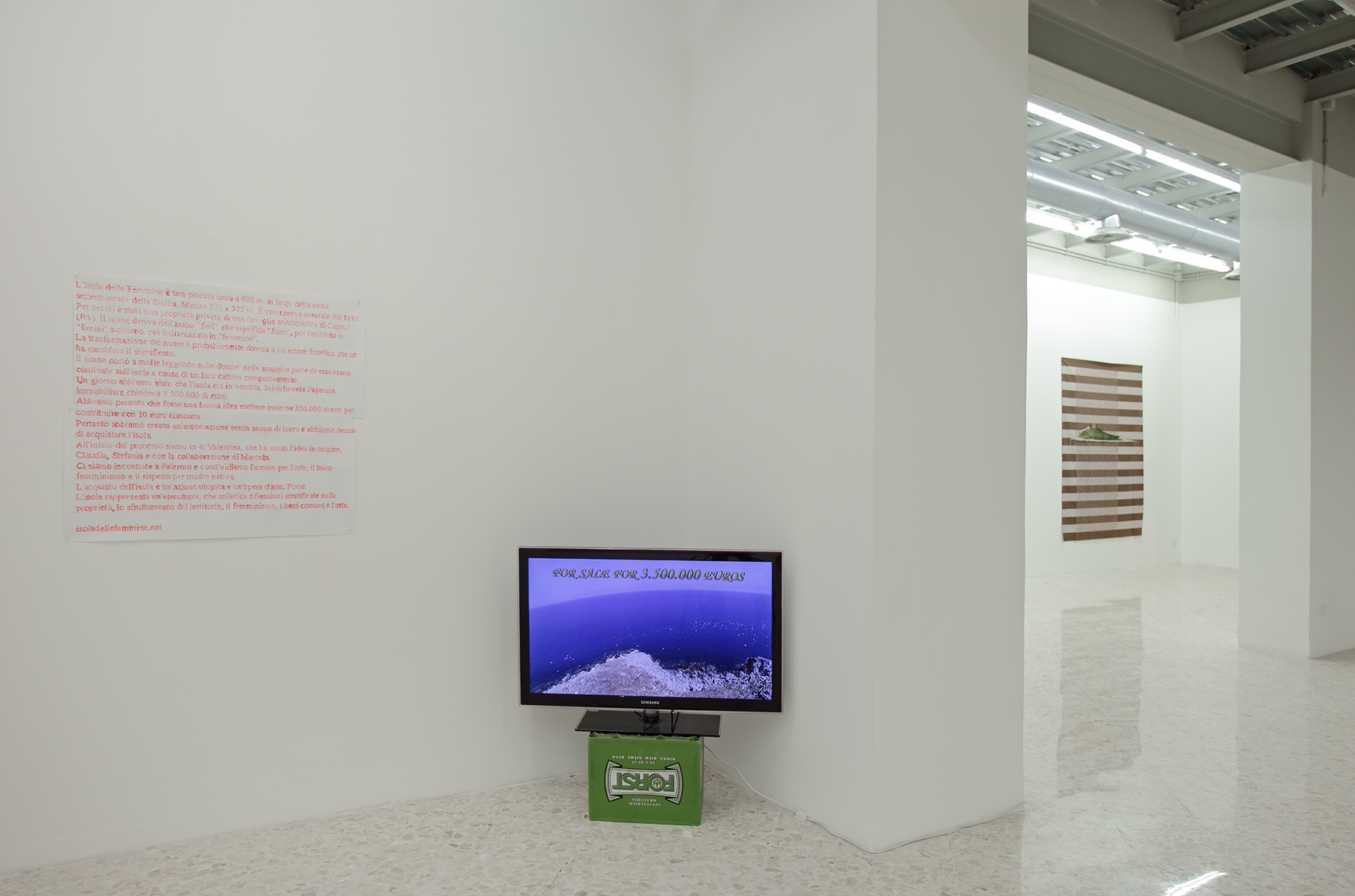 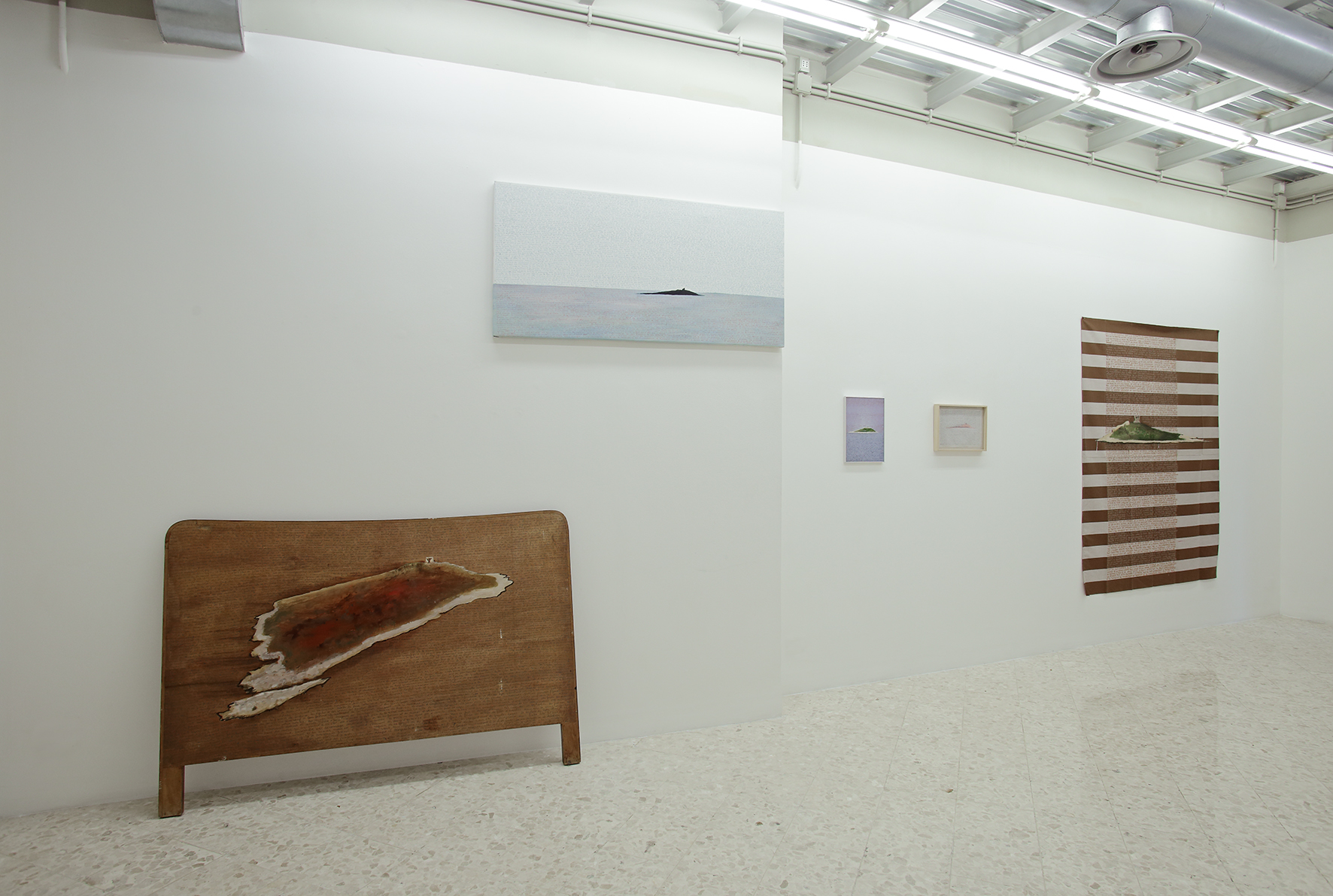 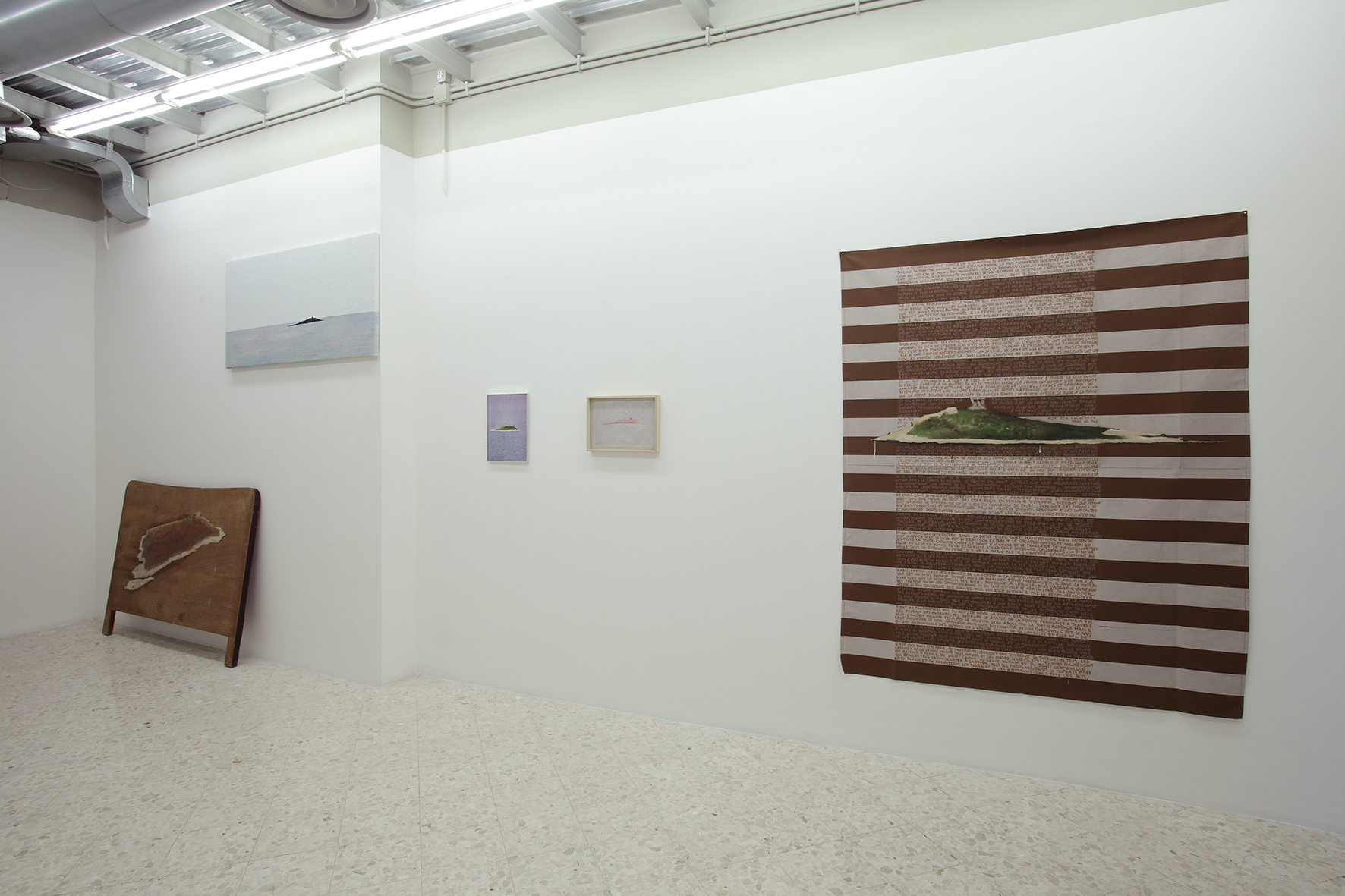 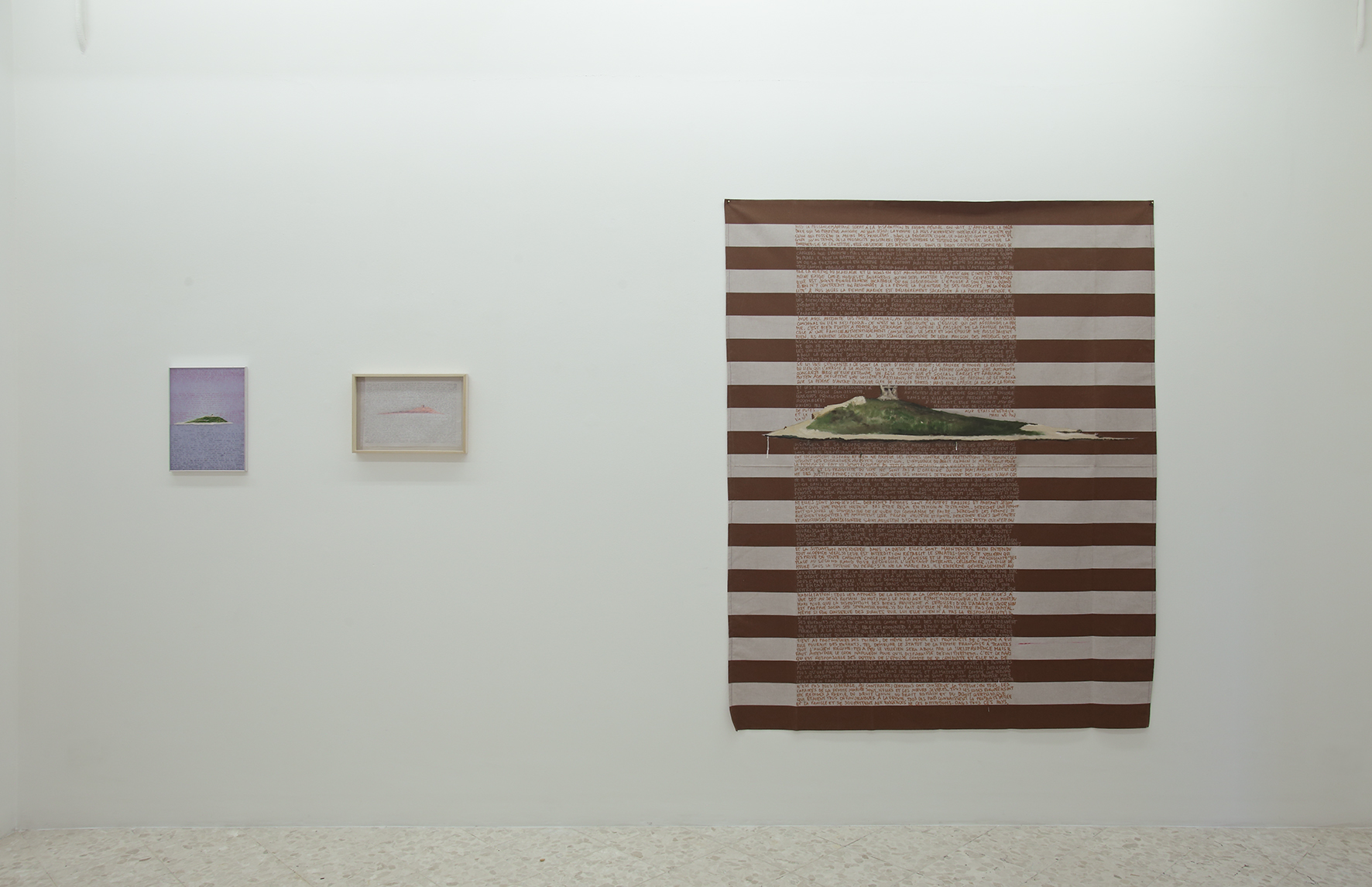 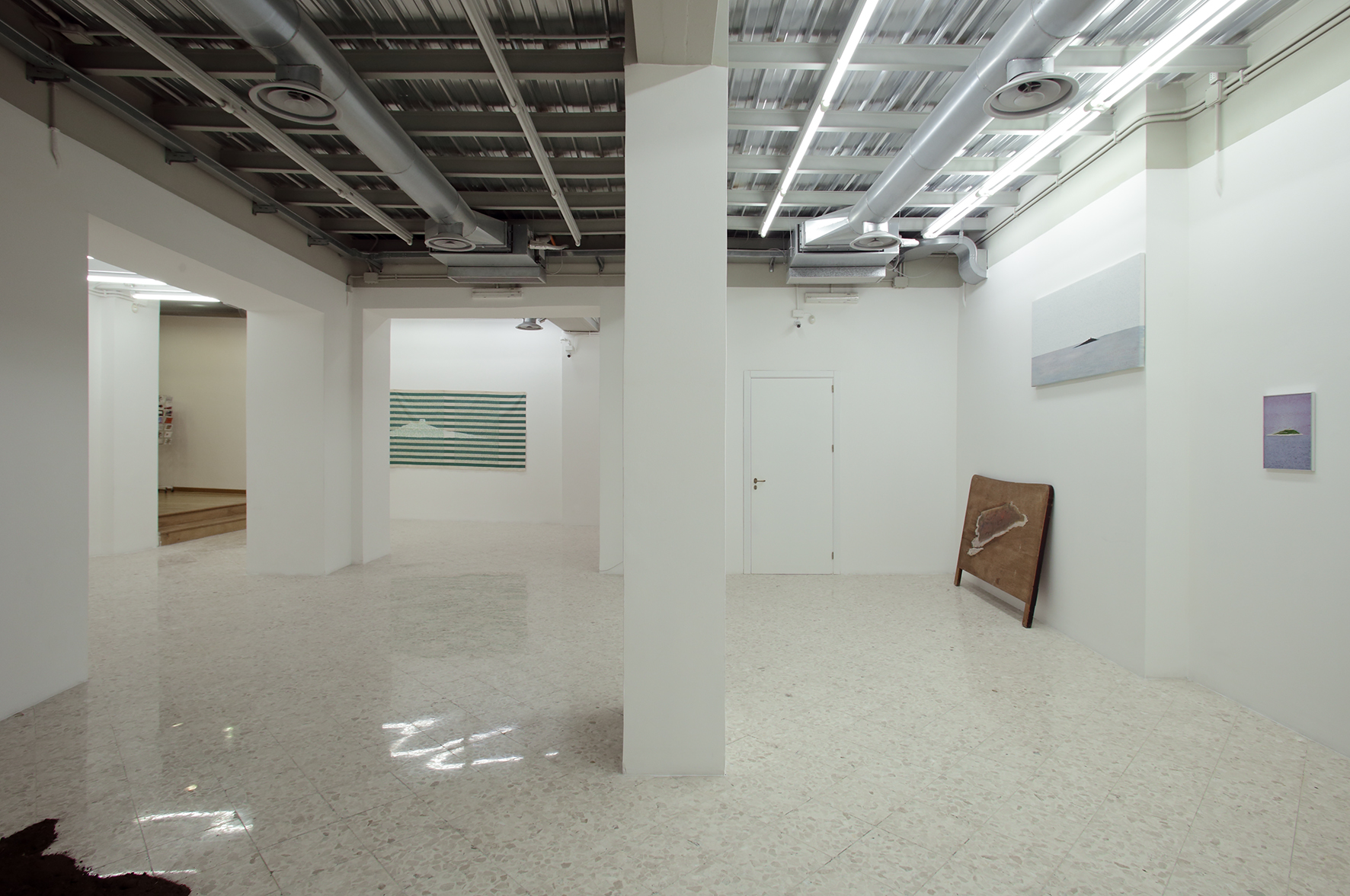 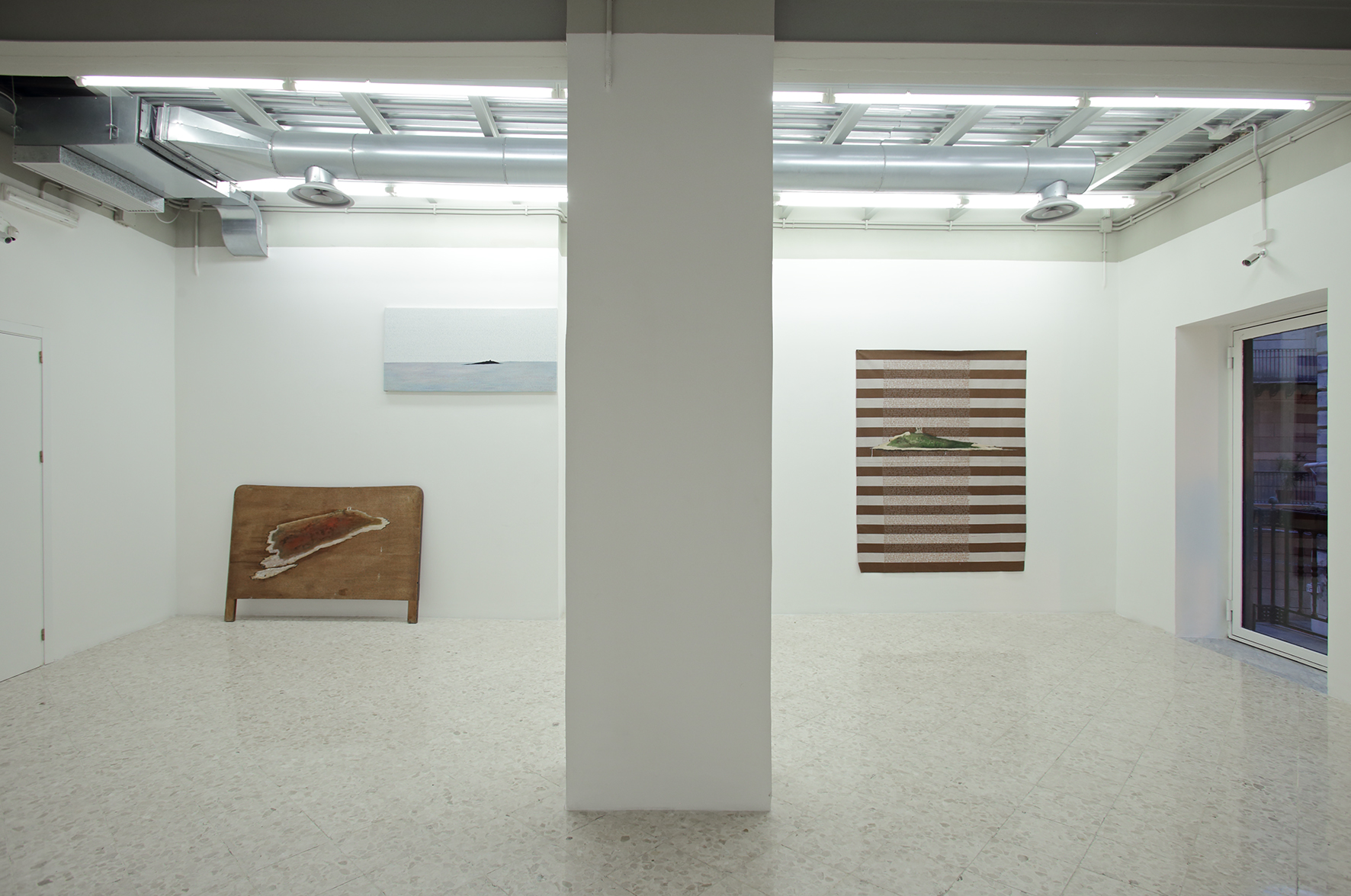 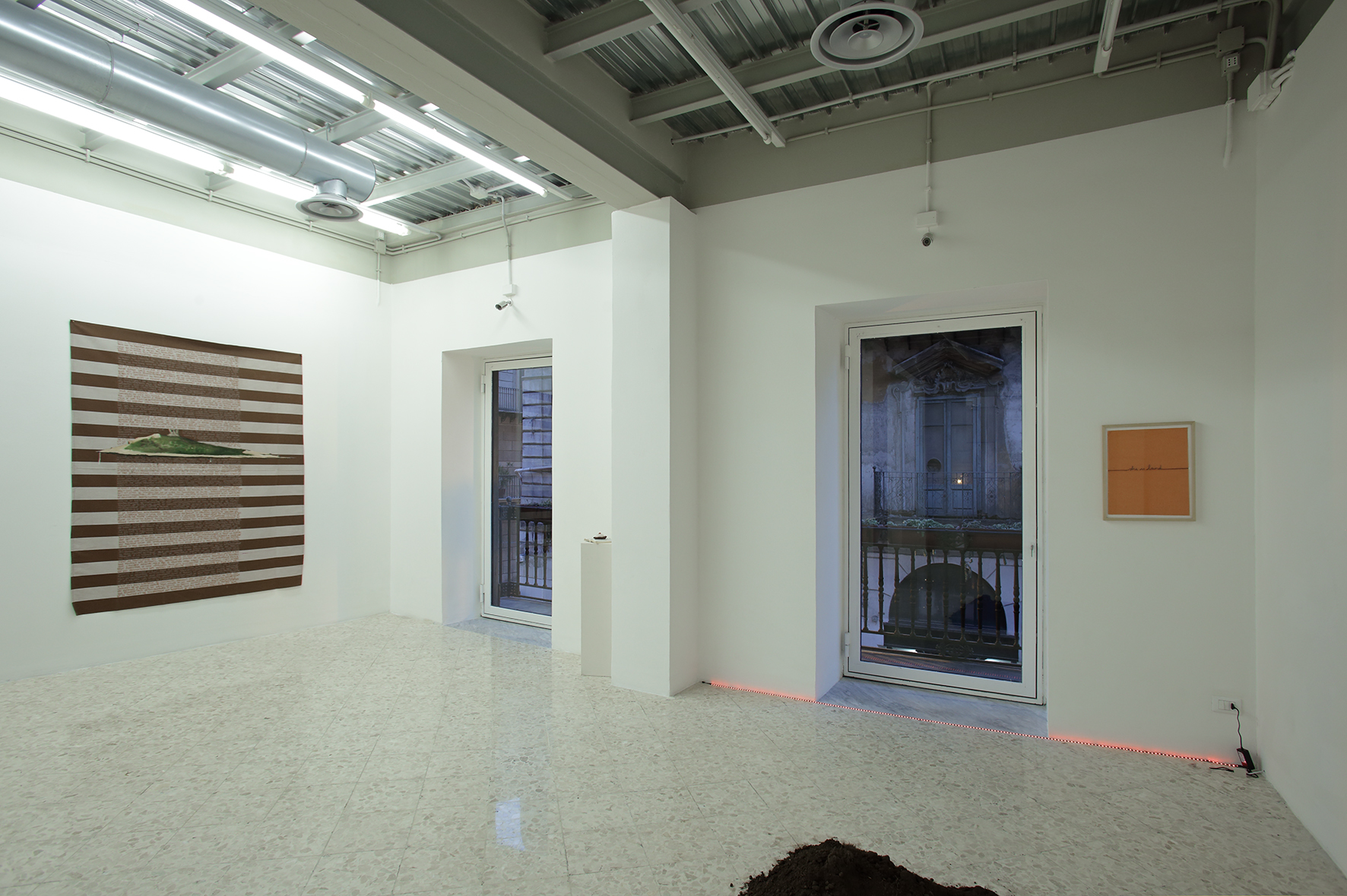 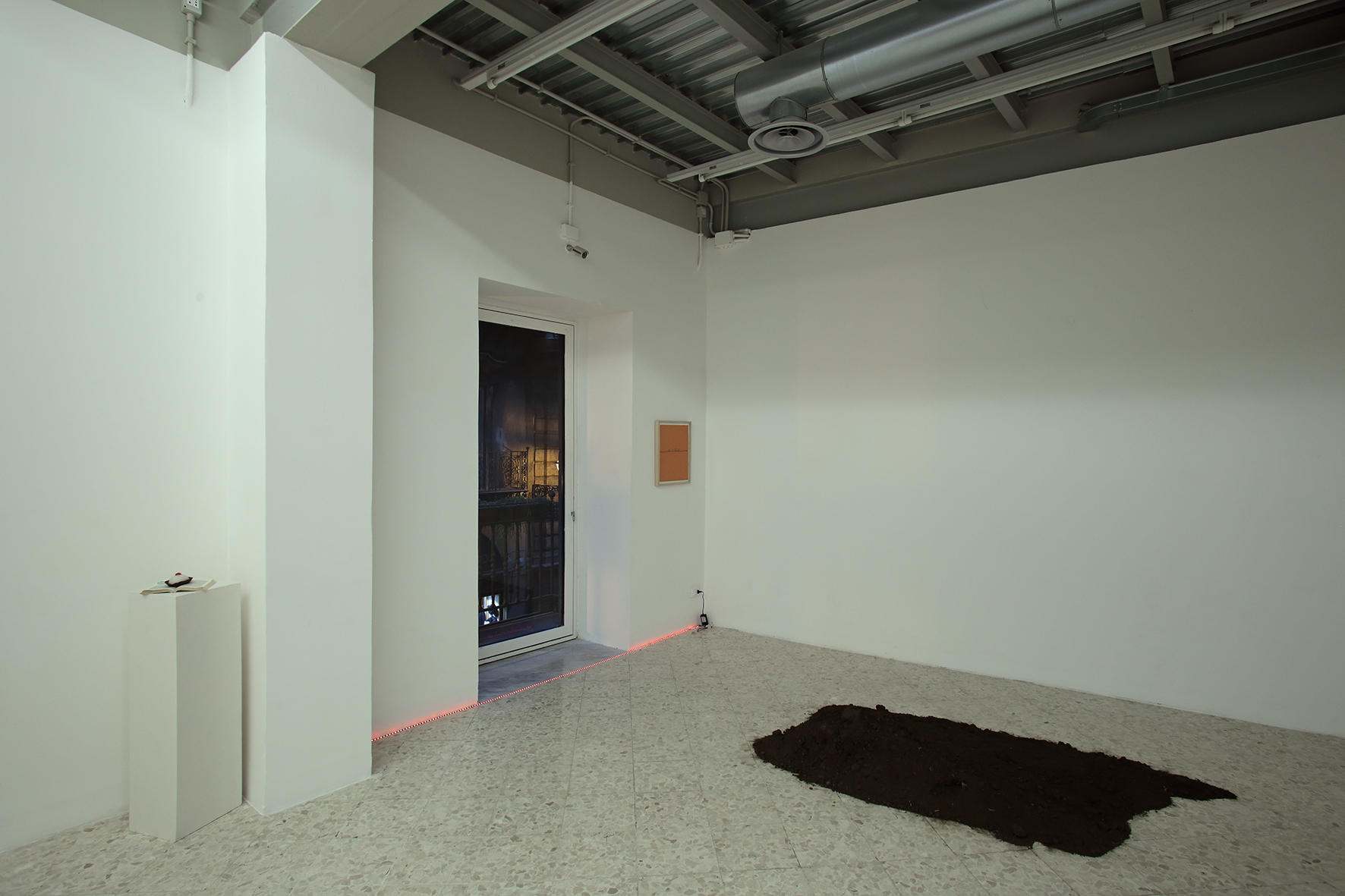 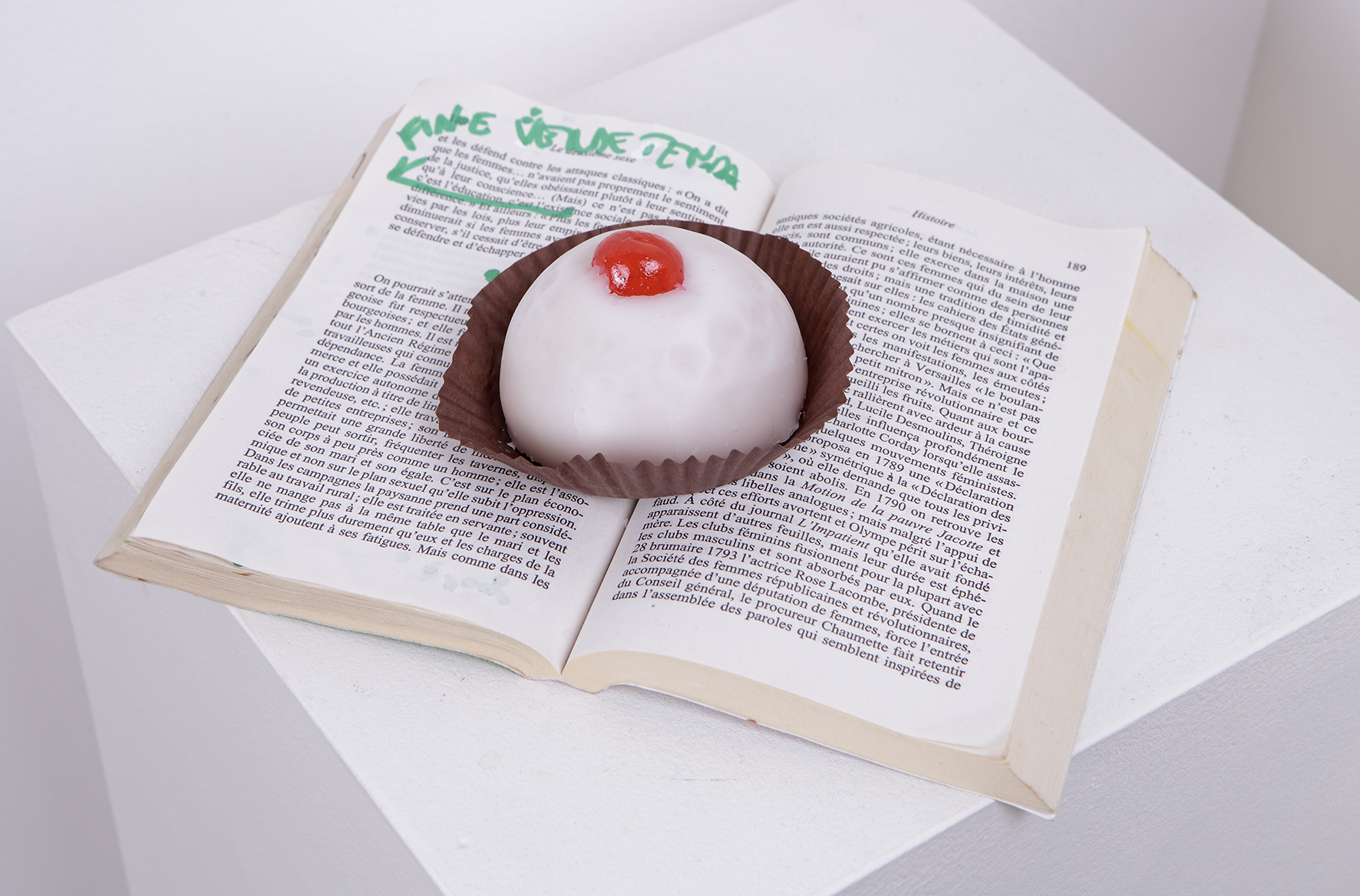 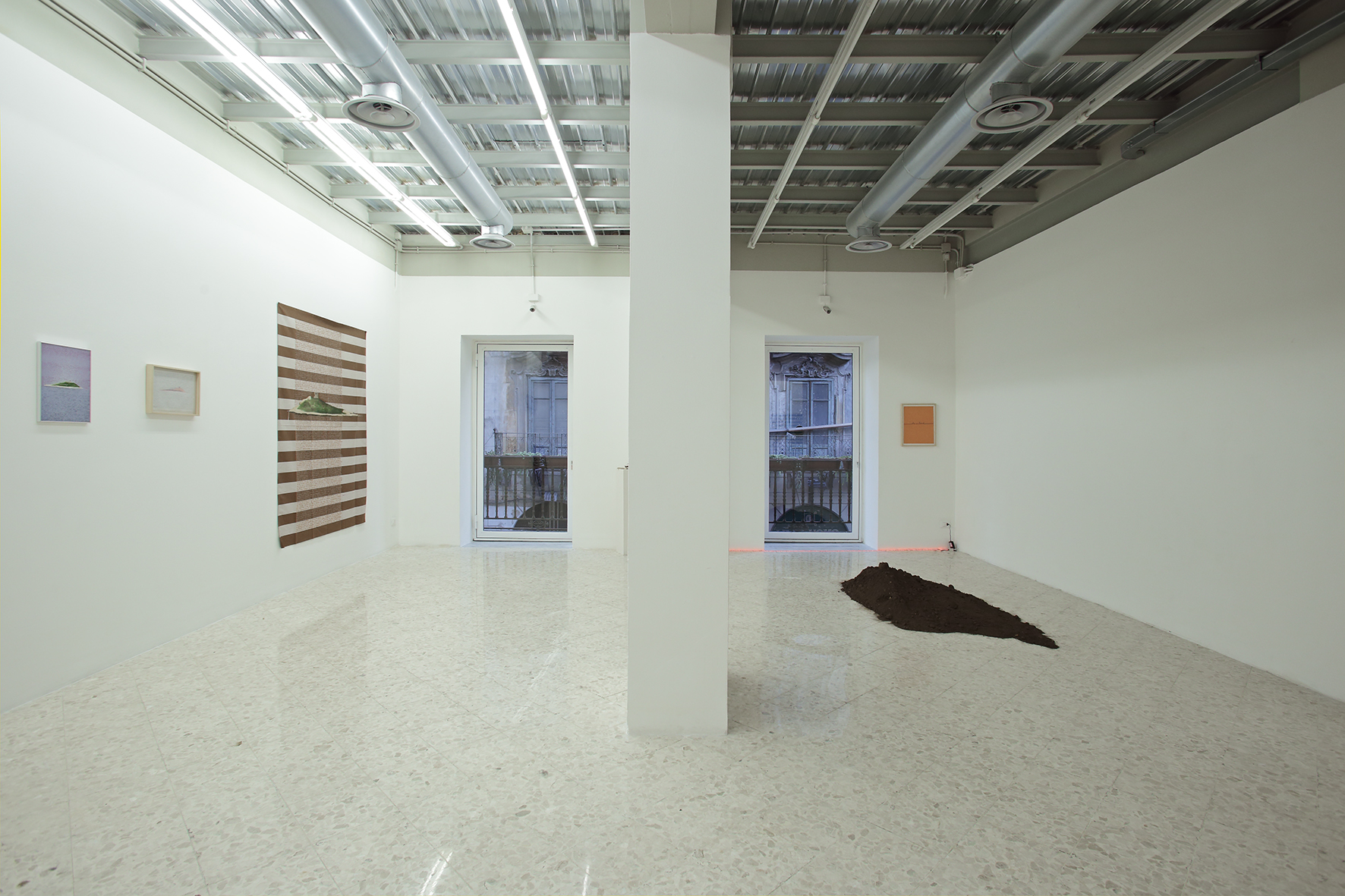 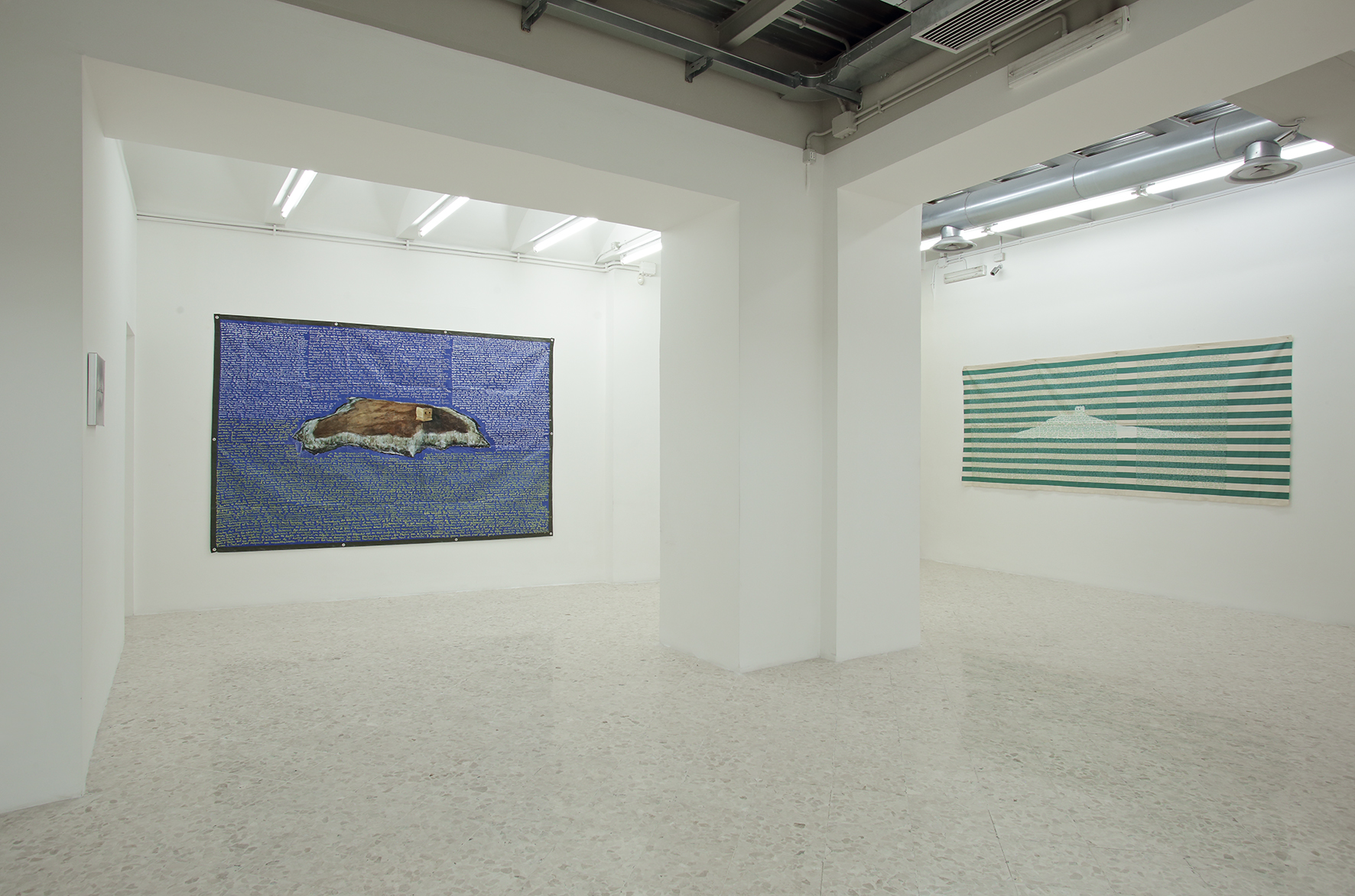 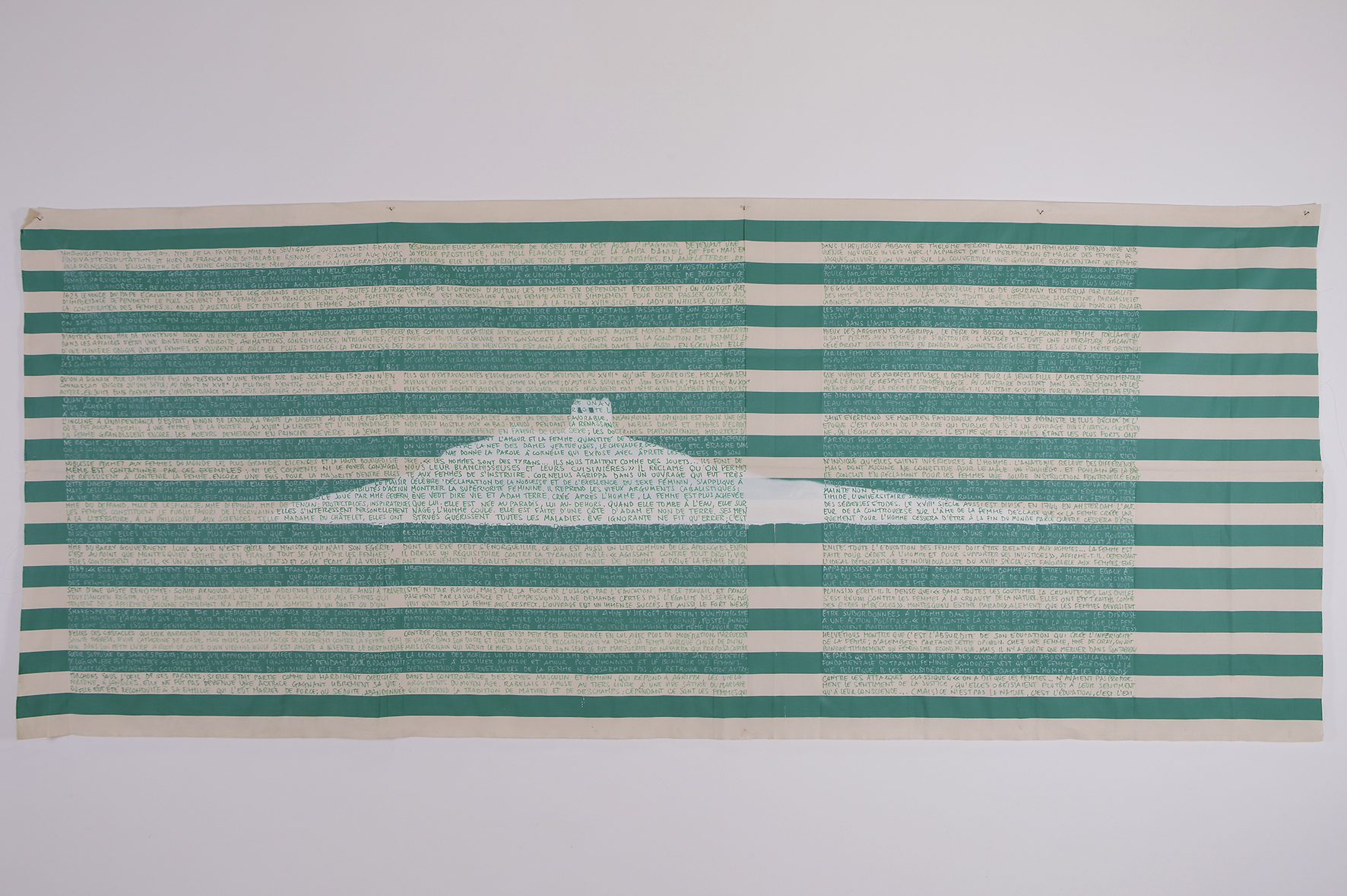 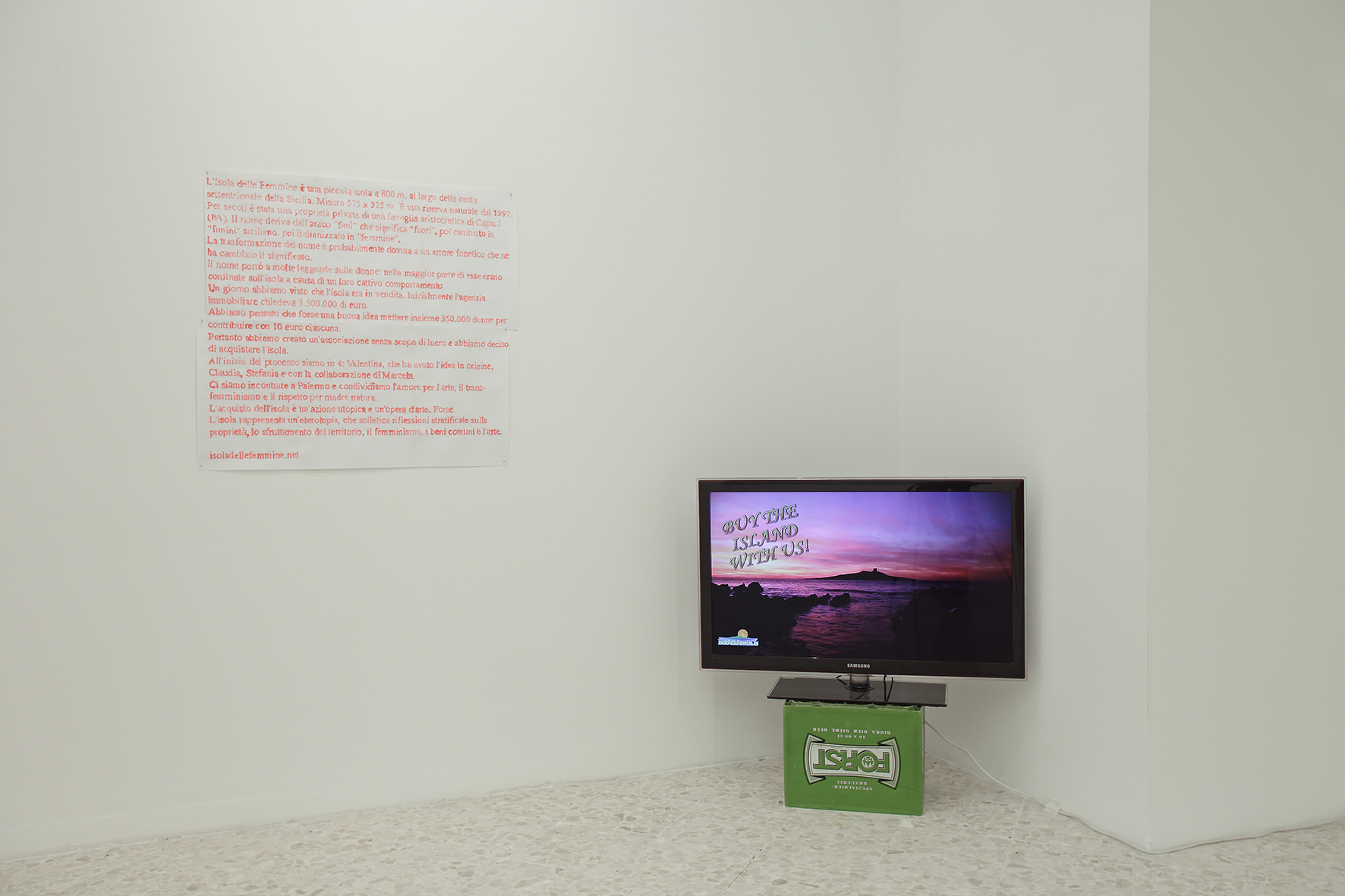 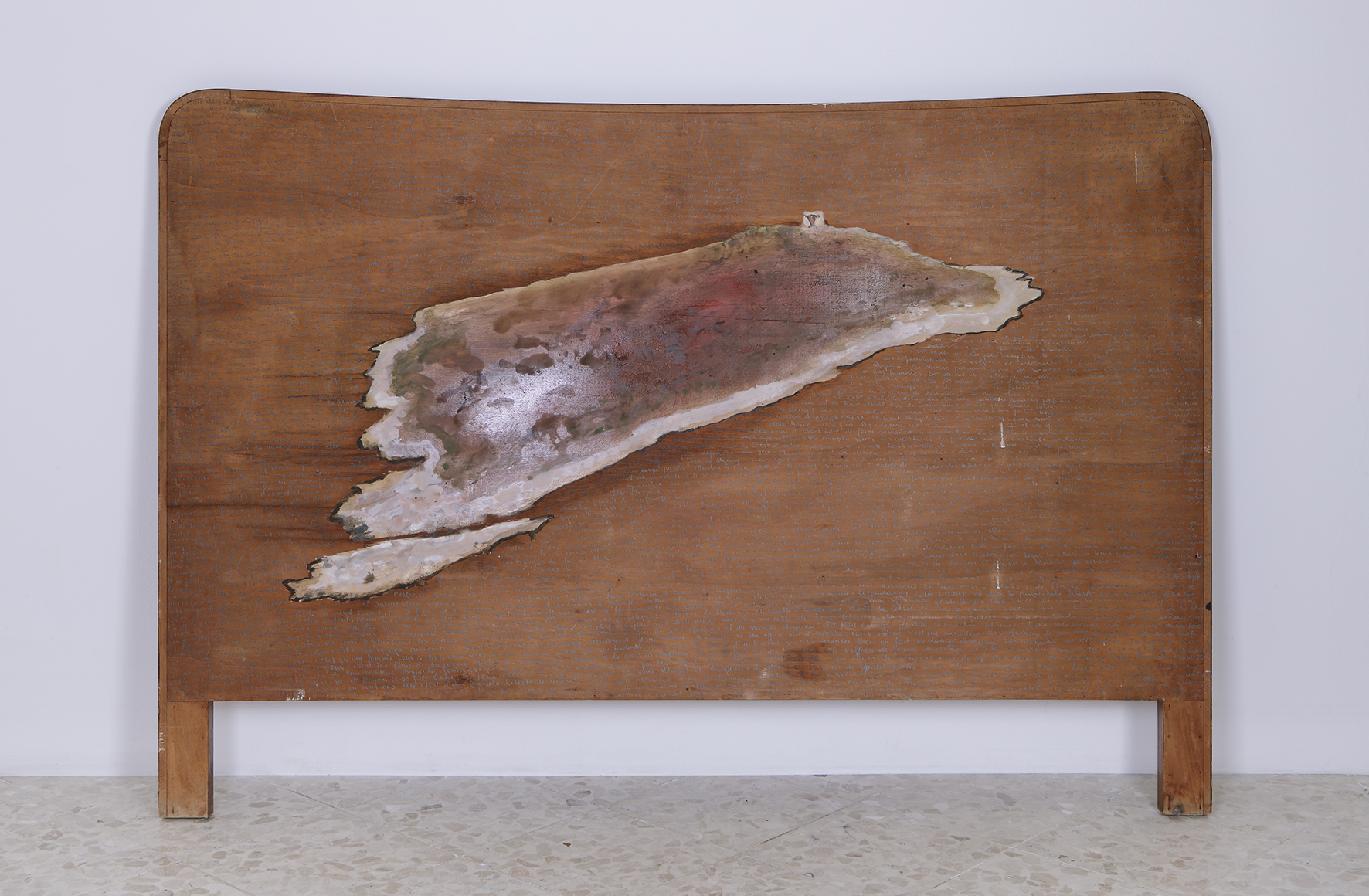 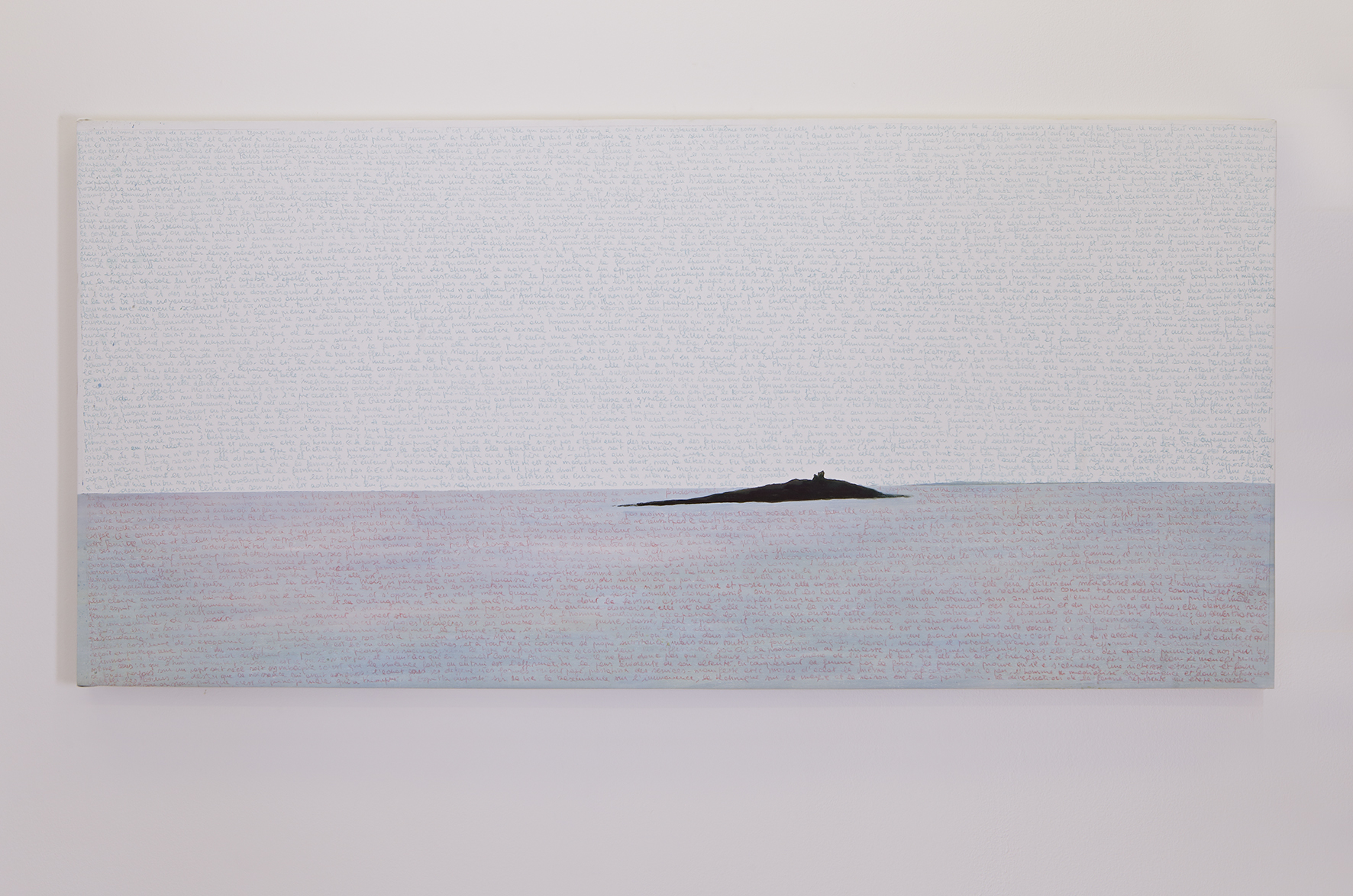 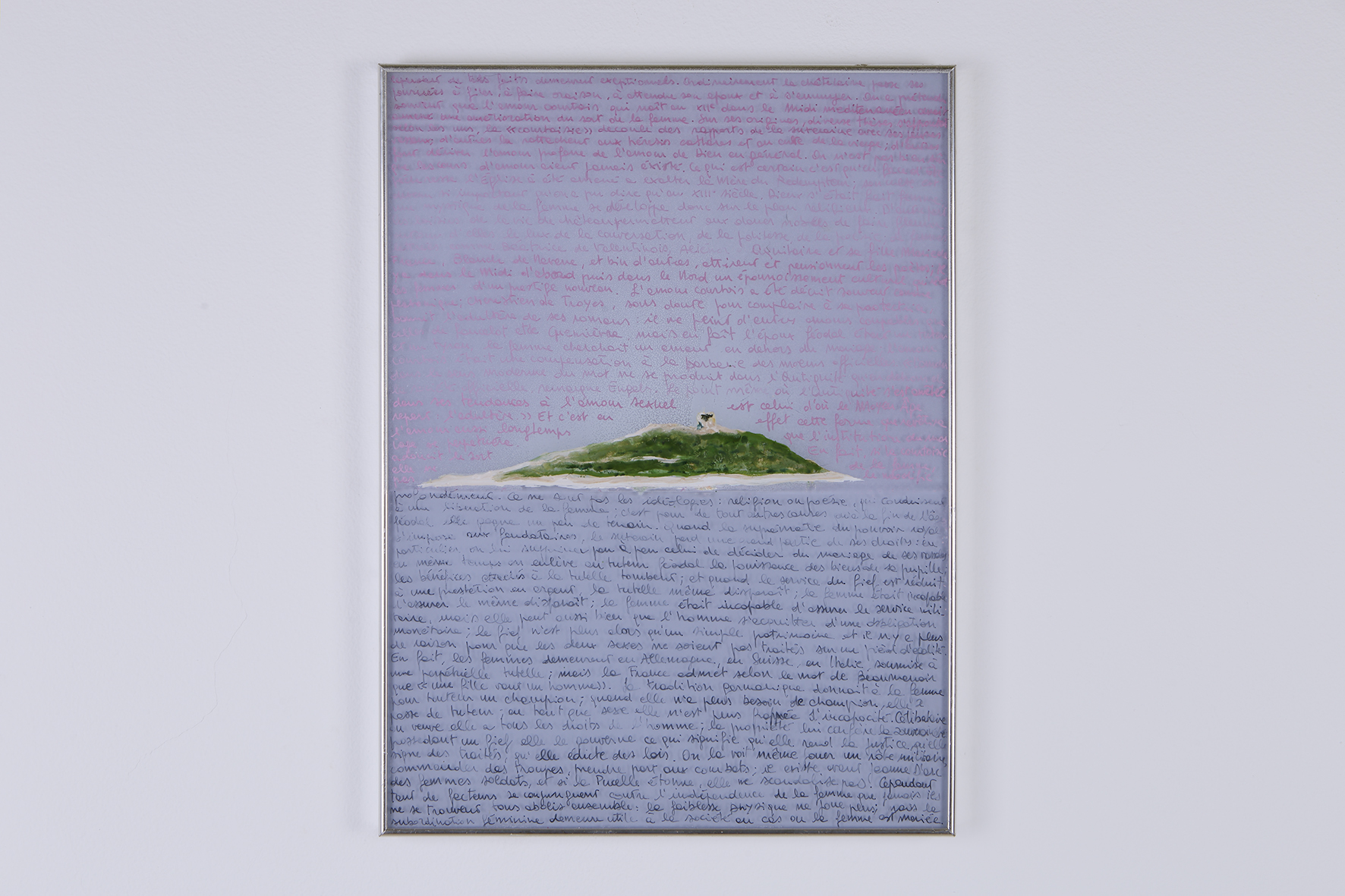 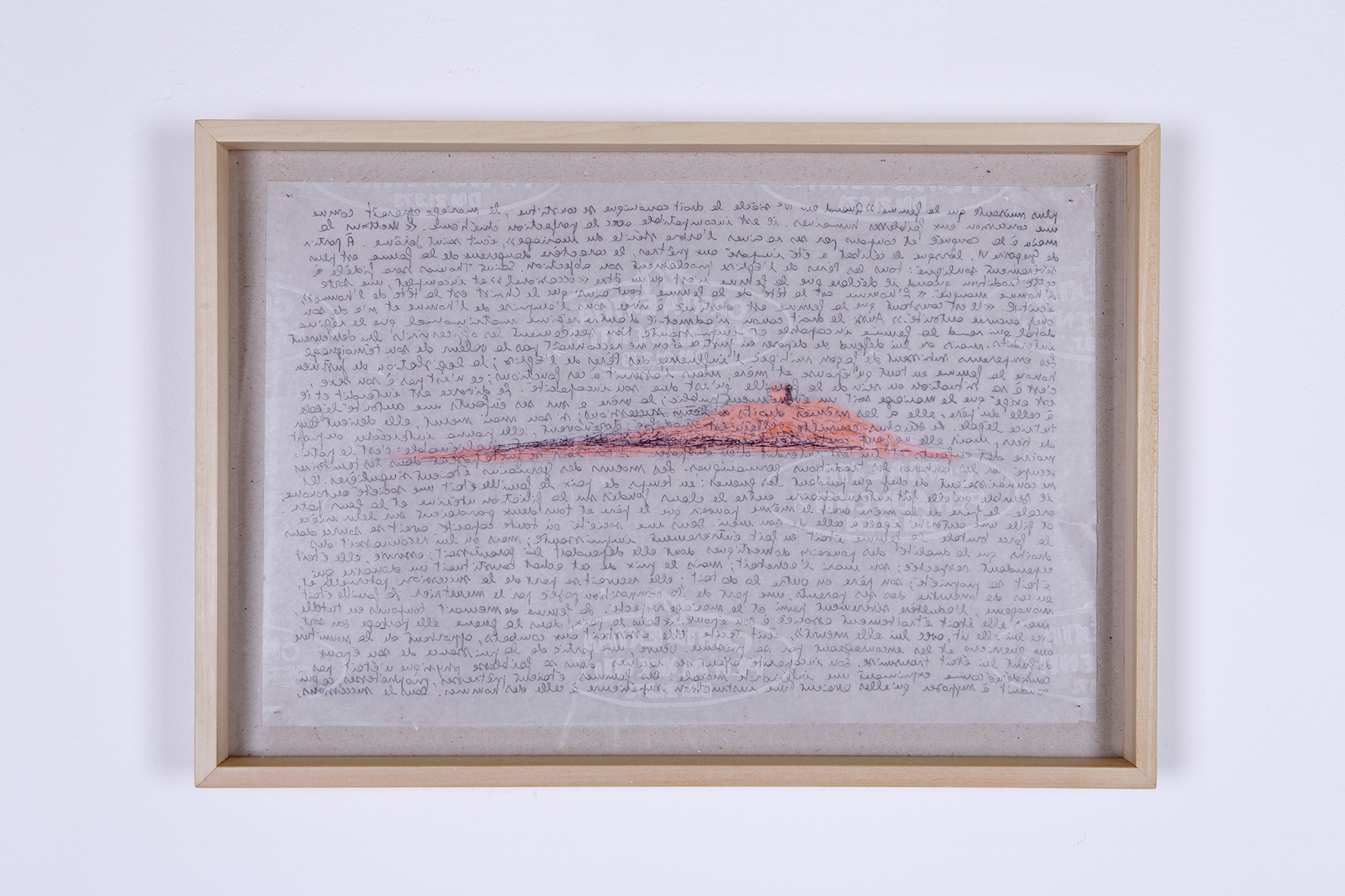 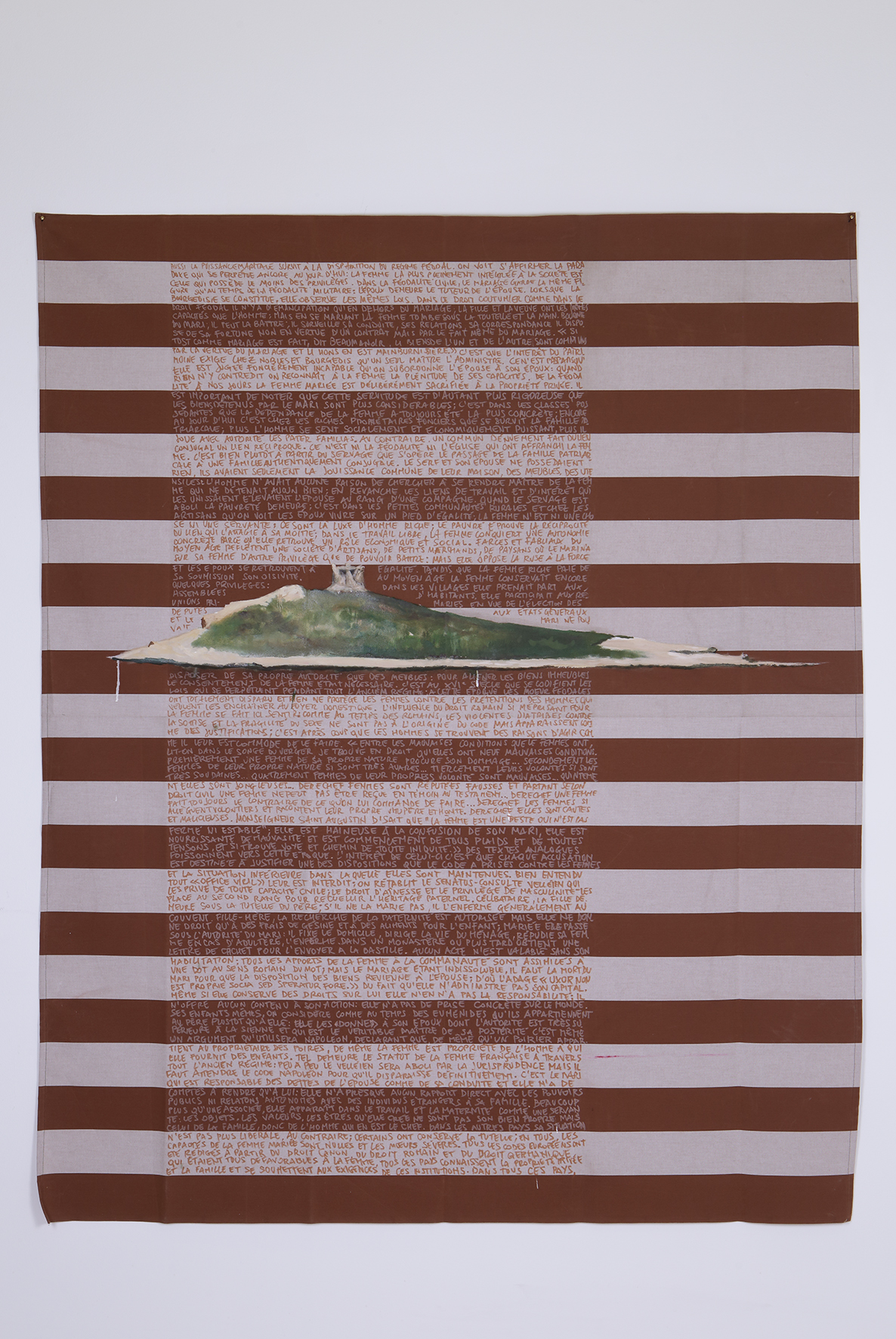 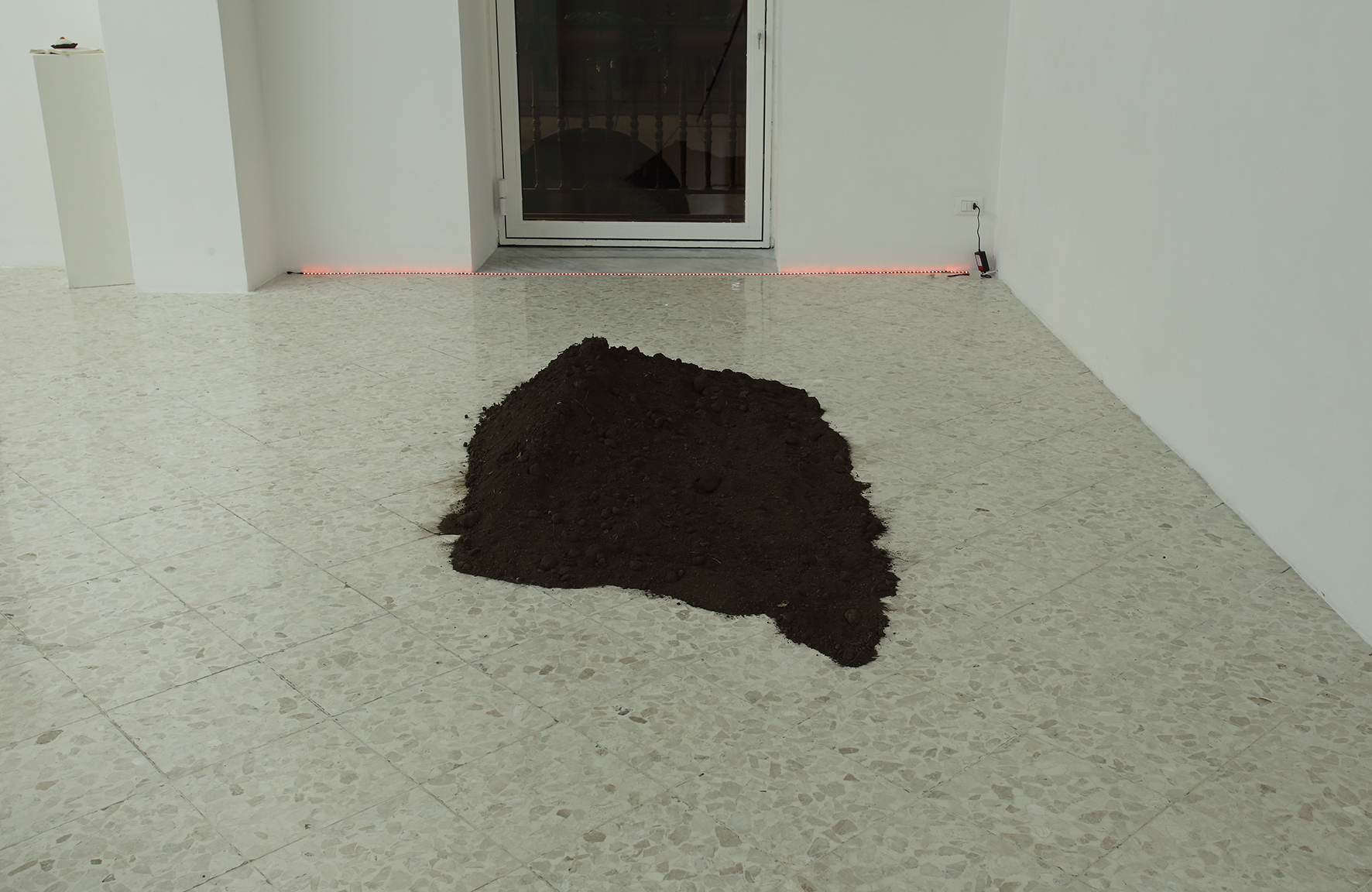 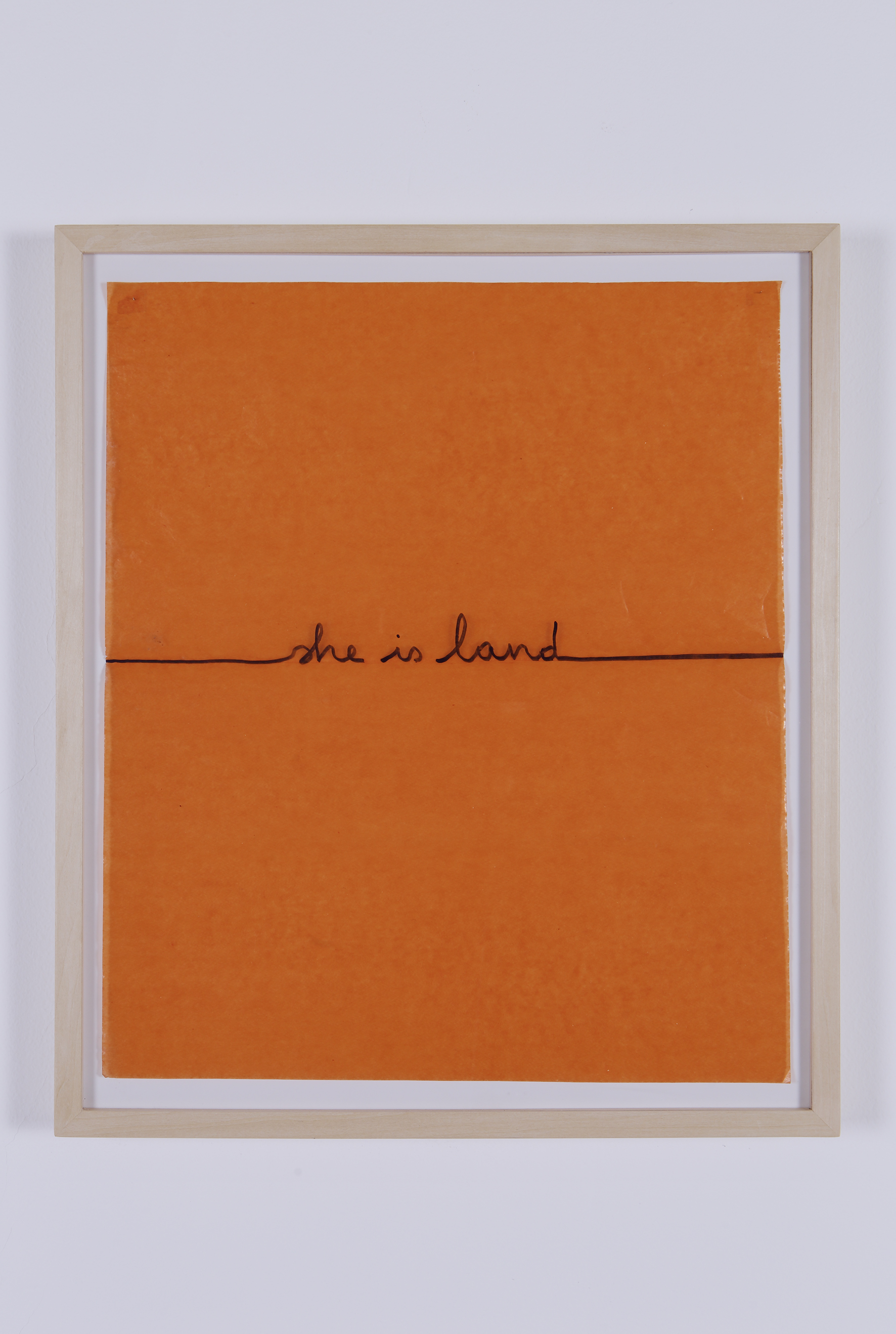 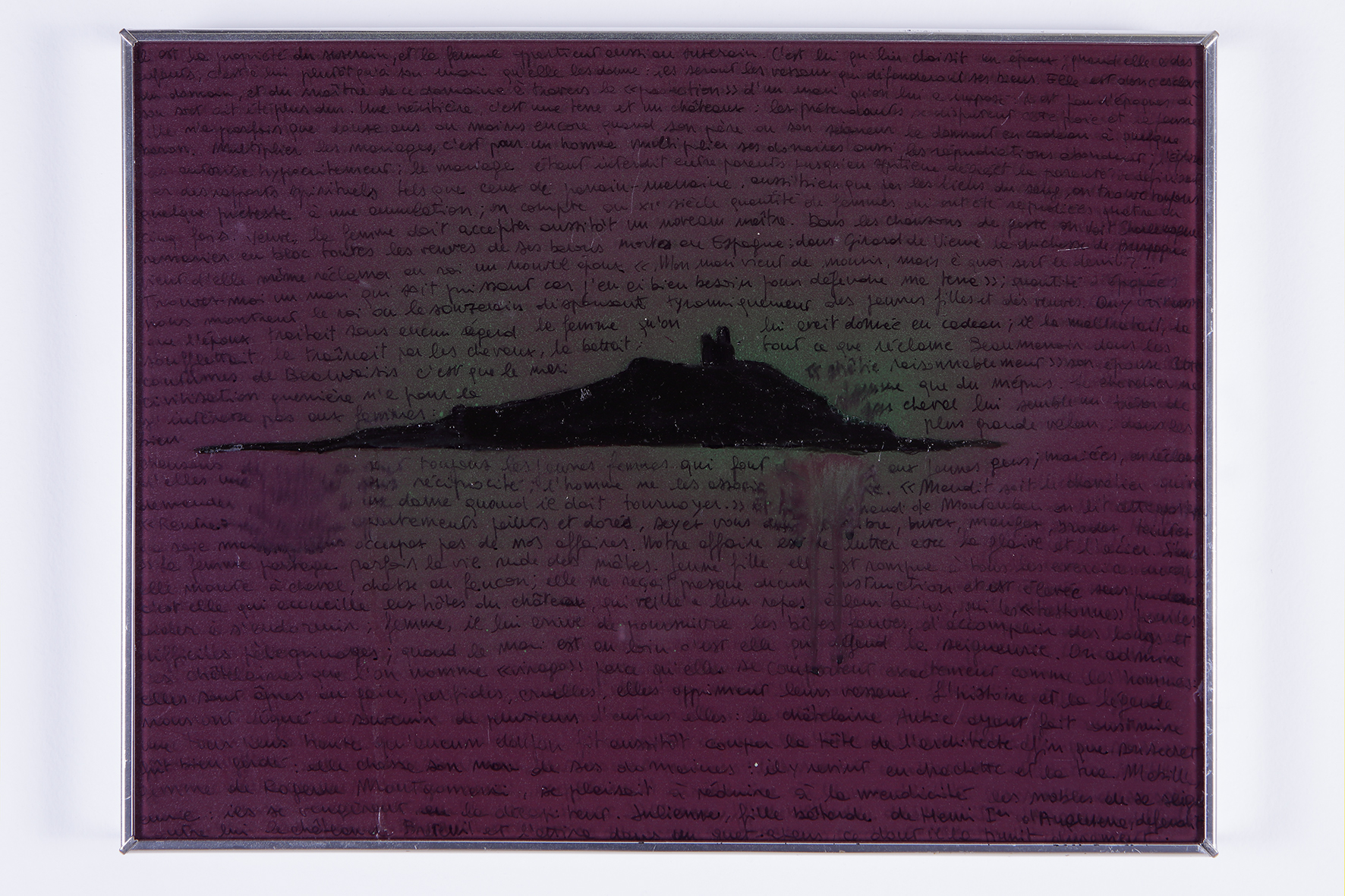 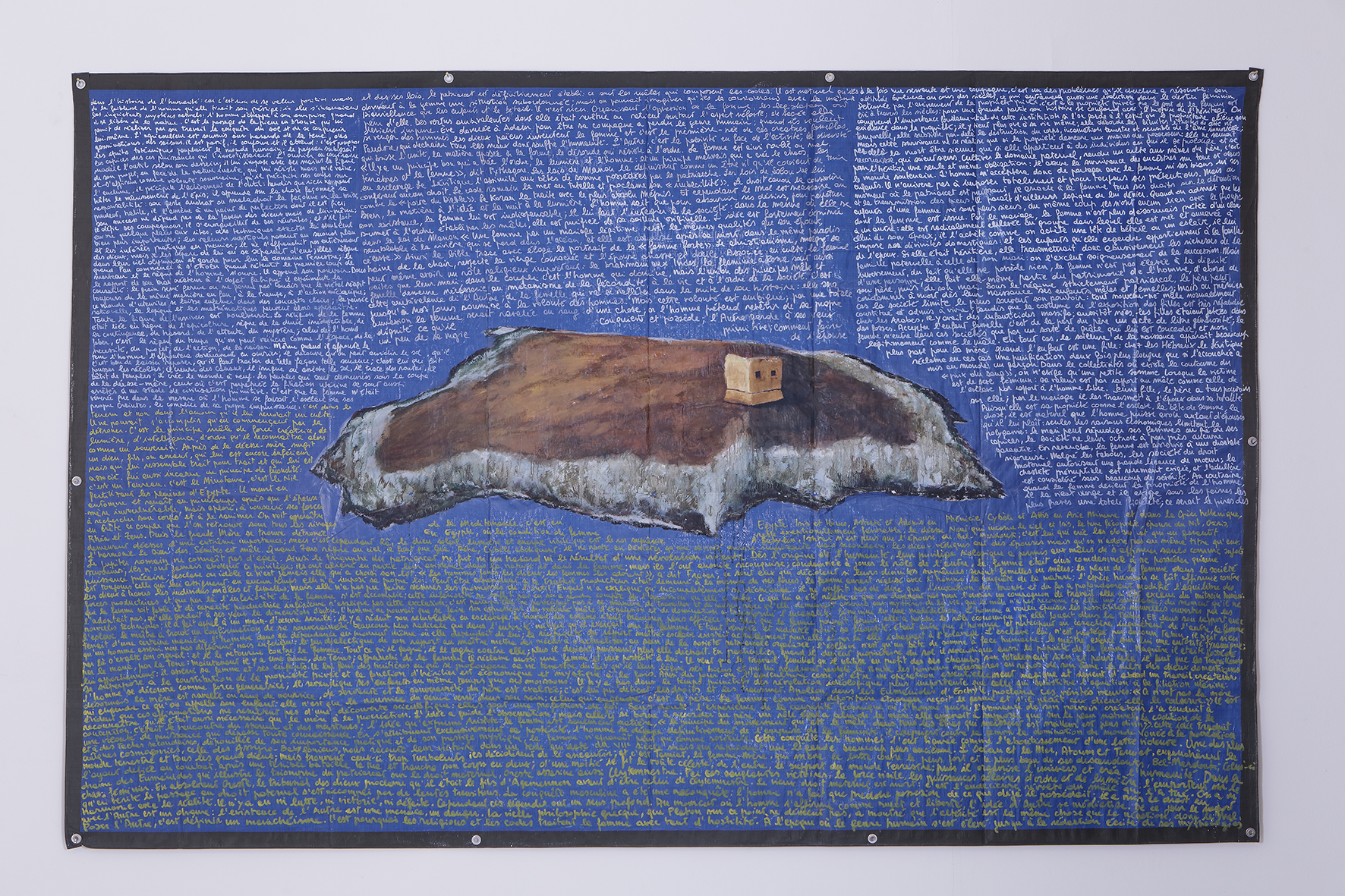 I work behind the scenes, supporting artists and curators. For me, Stefania Galegati’s invitation was an opportunity to explore her work from another point of view, in an even more profound and intimate way.
I believe that the moments that come before the opening reception are the most important.
Artists bring their work out of their studios. The art sees the sun’s light, and ideas sometimes change. It is often a race against the tyranny of time. But on every occasion each other’s sensitivities – always different, always unique, always suggestive – are touched.

During the phase of hanging an exhibition I take part in an event that always has different characteristics. Everything is to be defined, creating the thought and sense of the exhibition’s path.
Artists describe their works in these precious moments, explaining the how and the why of everything. This has been a special time with Stefania Galegati for me. Starting from She Is-Land I began to write down all of my questions, so that they could become part of my memory – a personal archive – and not just words spoken whilst we wandered around the gallery, or were at the framers, or had a coffee.

When Stefania Galegati first told me about Femminote the association did not even have a name. The project was born from a crazy but insightful idea, that is to bring together 350.000 women to buy an island that, as was stated in the property advert, is, “inside the Isola delle Femmine Nature Reserve, currently managed by LIPU (Italian League of Bird Protection”, but also,
“a unique opportunity for someone looking for a trophy asset”.

At first the idea seems absurd. But after listening to it again certain thoughts and visions came up, allowing one to dream and reflect on themes such as the management of cultural assets, private property and the common good, the care of the land, feminism and its derivatives, being open to failure, weakness.
To spread word of the project every member of Femminote will contribute in their own way and language. The pieces created by Stefania Galegati – whilst maintaining a focus on the island – also become a way of developing relationships and research, and creating readings, writings and painting.

Giulia Monroy: In She is land, the promotional video for purchasing Isola delle Femmine you used images taken from the internet that are often amateur and unrefined. How much do you think this sort of communication – that is very much in use today – influences the way of seeing and experiencing a landscape?

Stefania Galegati: A landscape is a cultural question, and only exists through our own gaze. Isola delle Femmine is only a piece of land jutting up above the sea, but its name and its symbolism is full of meaning. The narrative layering was born from the potential heterotopia of the island as another space where you can reimagine and idyllically open up other possibilities. Borrowing already existing videos from Youtube is a practice that I usually use when I VJ, it’s a sort of recycling of visuals that already exist. It seems to me that the world is so very overloaded with images and artefacts that I cannot really imagine productions that use new prime materials without at least giving a chance of reusing them. The same thing applies for the paintings of the island which are often painted/written on reclaimed fabrics that I found.

G.M. In the exhibition Modalità Aereo (2018) I remember the sculpture Torno subito#1 where you recreated the habit of saving a car parking spot with whatever can be found, such as a chair or an empty beer case, occupying public space for private, individual use.
In the last few years there has been news about the operation of purchasing a small piece of land (1m2) along the proposed Turin-Lyon high-speed train line by No TAV, privatising something to take care of the collective.

What does private property mean to you today?

S.G. Private property (or public, since it only spreads to people related to the state, but not everyone) is a complete right on an asset that immediately becomes exclusive, also by way of excluding another person from that same right. I know of many examples like the No TAV one that you mention and they are very important because they weaken capitalism from the inside, using the same methods but trying to gain the opposite result – often the protection of land or of at-risk communities. Isola delle Femmine does not have an obvious urgency for protection, as it is already a protected Nature Reserve. But the collective gesture of taking back land on behalf of the women who want to do so allows a utopian level of possibilism and a shared act of rebellion. We should remember that there are still countries where women do not have the right to have private property. (And if that right was also taken from men it would be a big step…)

Modalità Aereo, however, reclaimed the habits of parking attendants who take space using their own skilfully aesthetic techniques, with my own usual ironic tone. In this case the appropriation goes in the other direction; a private space is appropriated to free it and make it everyone’s.

G.M. During the phase of choosing the works you told me that the series of portraits of the island helps you undertake “a good in-depth reading practice”; in “Per raccontare questa storia d’amore bisogna partire da Odessa” (2012), Bike Ride Story (2013), and last but not least Il Manifesto al Cadere (2019), you transcribed passages that you selected.
For the portraits of the island you are entirely transcribing the book “The Second Sex” by Simone de Beauvoir, a landmark of European feminism, that was published in 1949.

Where there words in the book that you would have preferred not to transcribe?

S.G. No. Unlike the stories written on the street where the text was chosen or commissioned by me, this is truly a practice of reading through writing. The Second Sex is a kind of encyclopaedia of feminism that I had never read before (actually right now I have read up to page 159 with the 15th painting-text). It is a kind of coming out from my sexist education. I come from an extremely patriarchal education that I have had to decolonise. It’s like in The Matrix. At a certain point you see reality in a clear way and so you have to re-elaborate it with the most aware tools. I have to thank my ex-husband so much for helping me with this process, opening my eyes to racism, and from there I have found many similarities with chauvinism. (To finally reply to your question I don’t agree with everything that de Beauvoir wrote. Some parts belong to a world that is different to today’s which is more open to breaking down definitions, referring to transfeminism and the LGBT world).

G.M. The subjects of your research are often examined and dissected so thoroughly that it could almost be defined as “serial”, I’m thinking of examples such as the series of paintings of the bunkers, the bandits and the zoos.
In this case will the number of paintings of the island be determined by finishing the book by de Beauvoir?

S.G. I have only done an eighth of the work. It is a very disciplined practice that I carry on without a break, similar to yoga. When it is finished there will be another project, or at least for 25 years of my career it has been like that. I don’t believe that painting and writing are like “mysteries of creation in the image of god”. I actually find this shamanism of painters from the 1800s and 1900s very chauvinistic and territorial and I don’t see any magic in it. I say this with a certain irony. Personally I feel that painting is a necessary activity for those who do it and perhaps also for those who see it.

G.M. In 2017 in Palermo at Piazza Indipendenza you encountered an uprooted pine tree. Together with a group of friends you decided to make this become Monumento al cadere. You said in your interview with Davide Ricco, “It is no longer defined as being a decorative maritime pine tree. It is broken and dead so it is probably not even a tree anymore. In English, which is a much more practical language than Italian, things that lose their life often have a different name (corpse/body, cow/beef, pig/pork). Due to the violence that it took to make a large tree fall down it is an unresolved object/space, for the sense of danger and instability that has left, for the decontextualisation of the roots now looking upwards, for the missing shadow.” Could you interpret Isola delle Femmine as a Monumento al cadere?

S.G. They are absolutely related and share the same conceptual emotion. I feel very close to etymology. If someone in the past had not transformed the Arab word Fimi to Fimmine and then to Femmine, the legend of the imprisoned girls on the island would never have been born. And it would never have been so interesting to buy for all the women who want it.