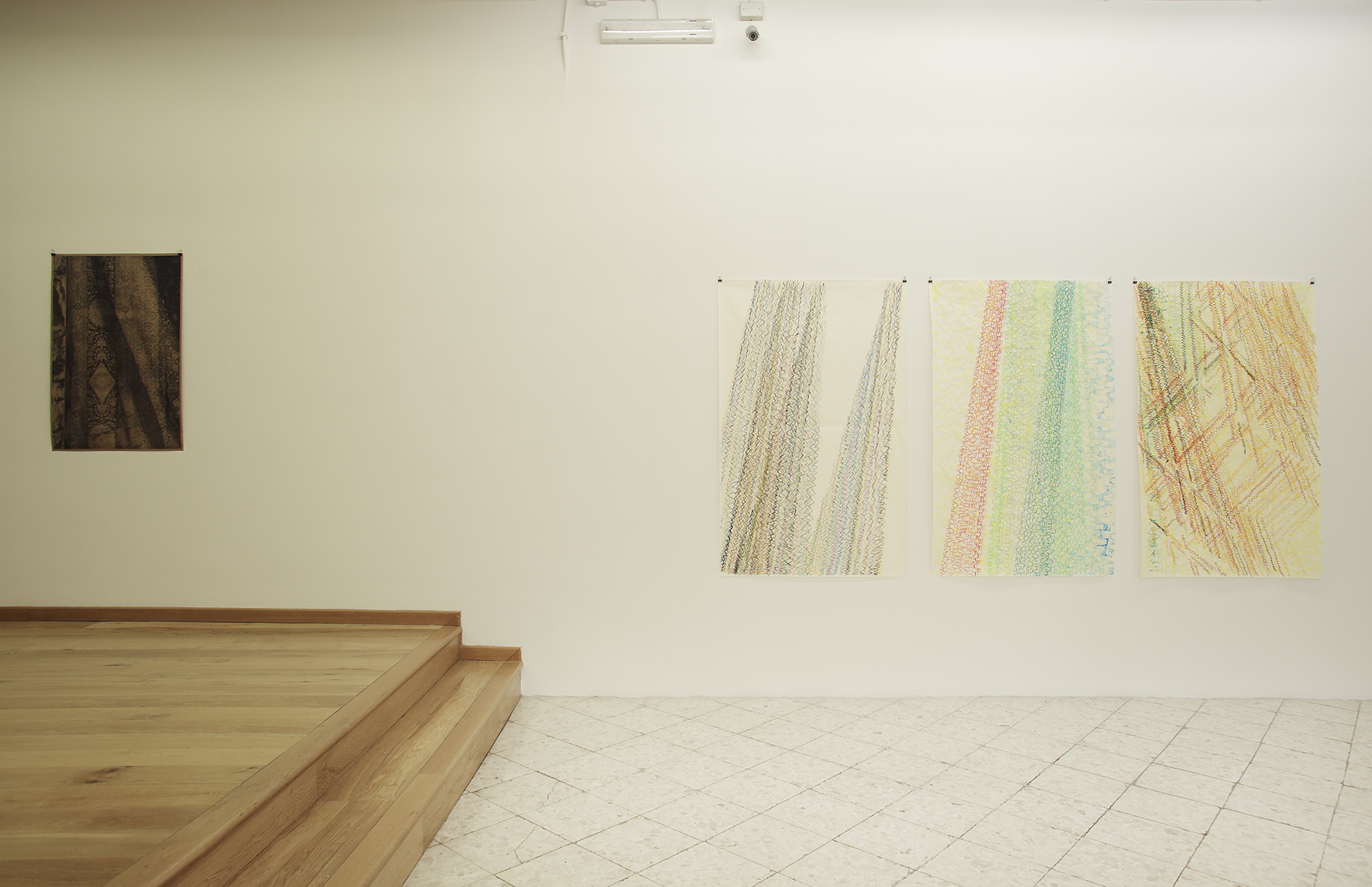 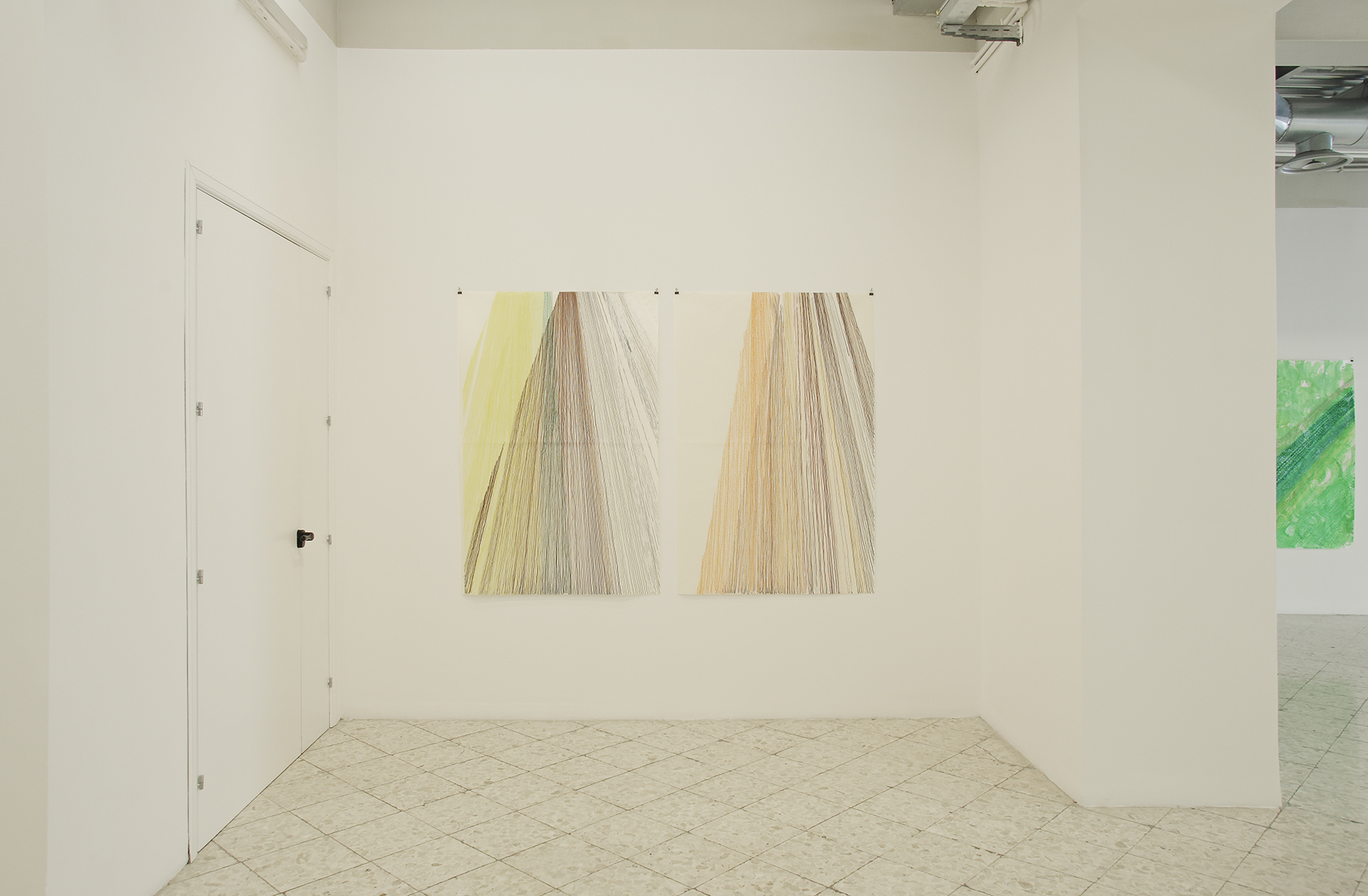 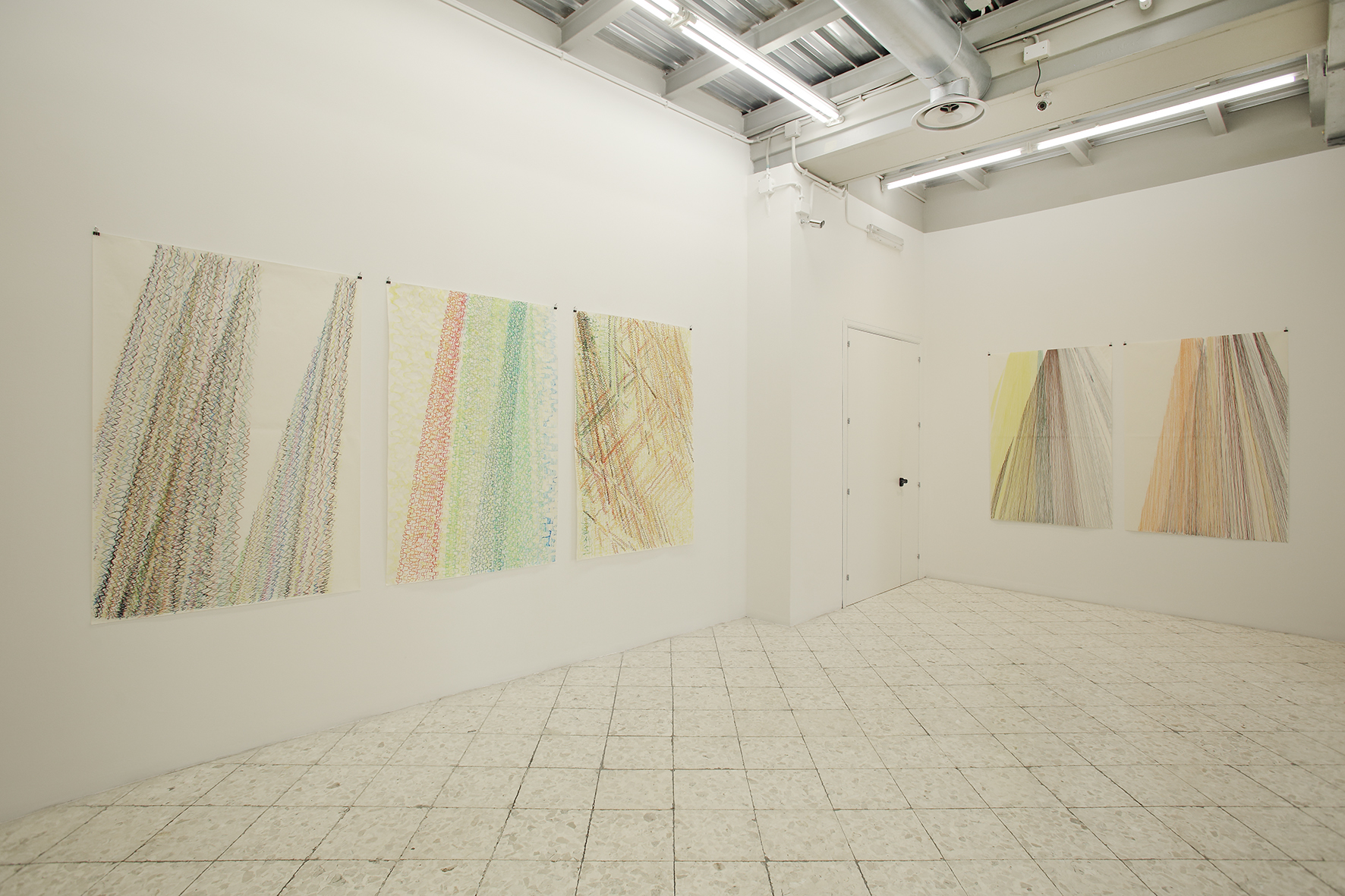 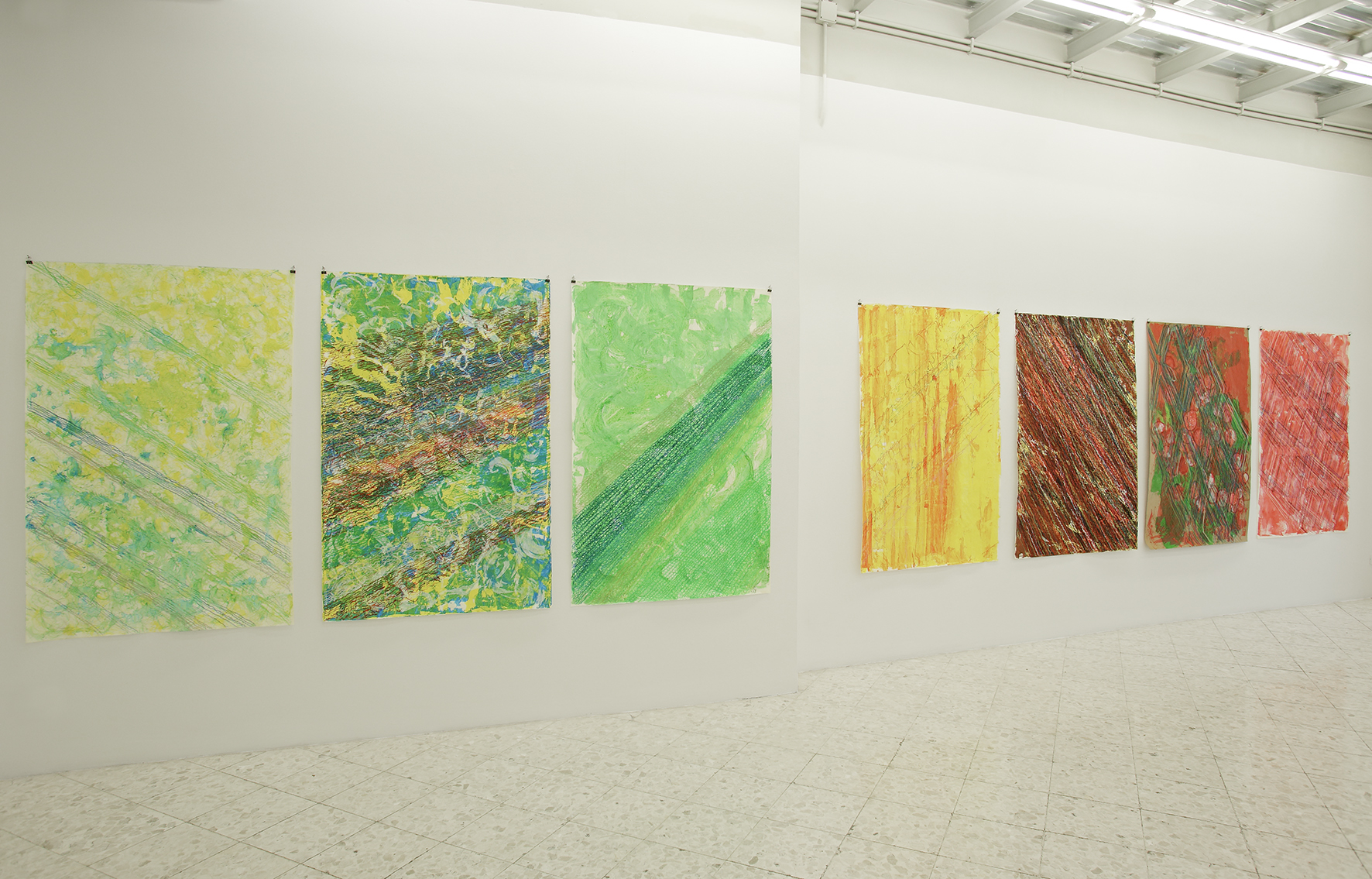 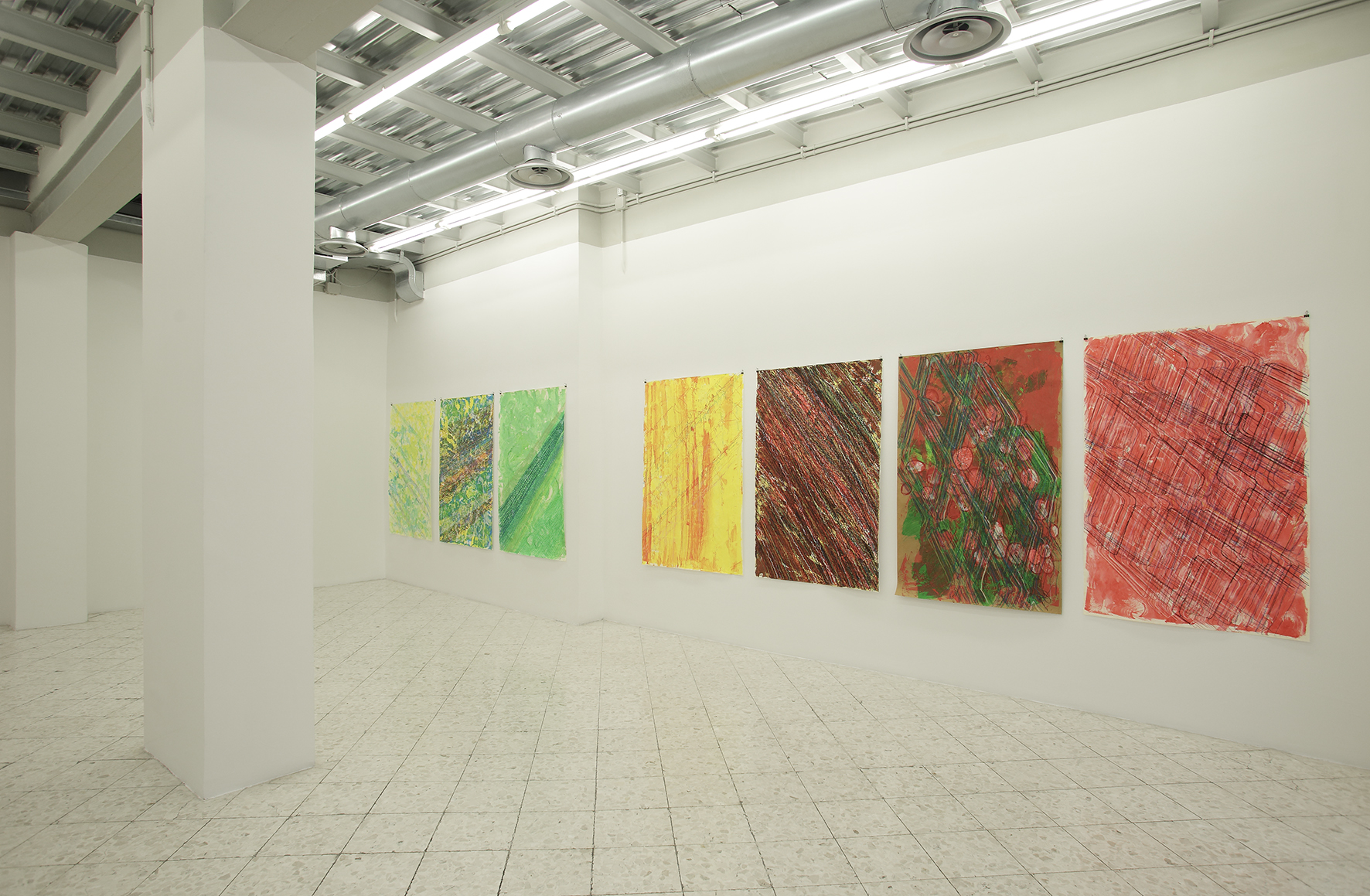 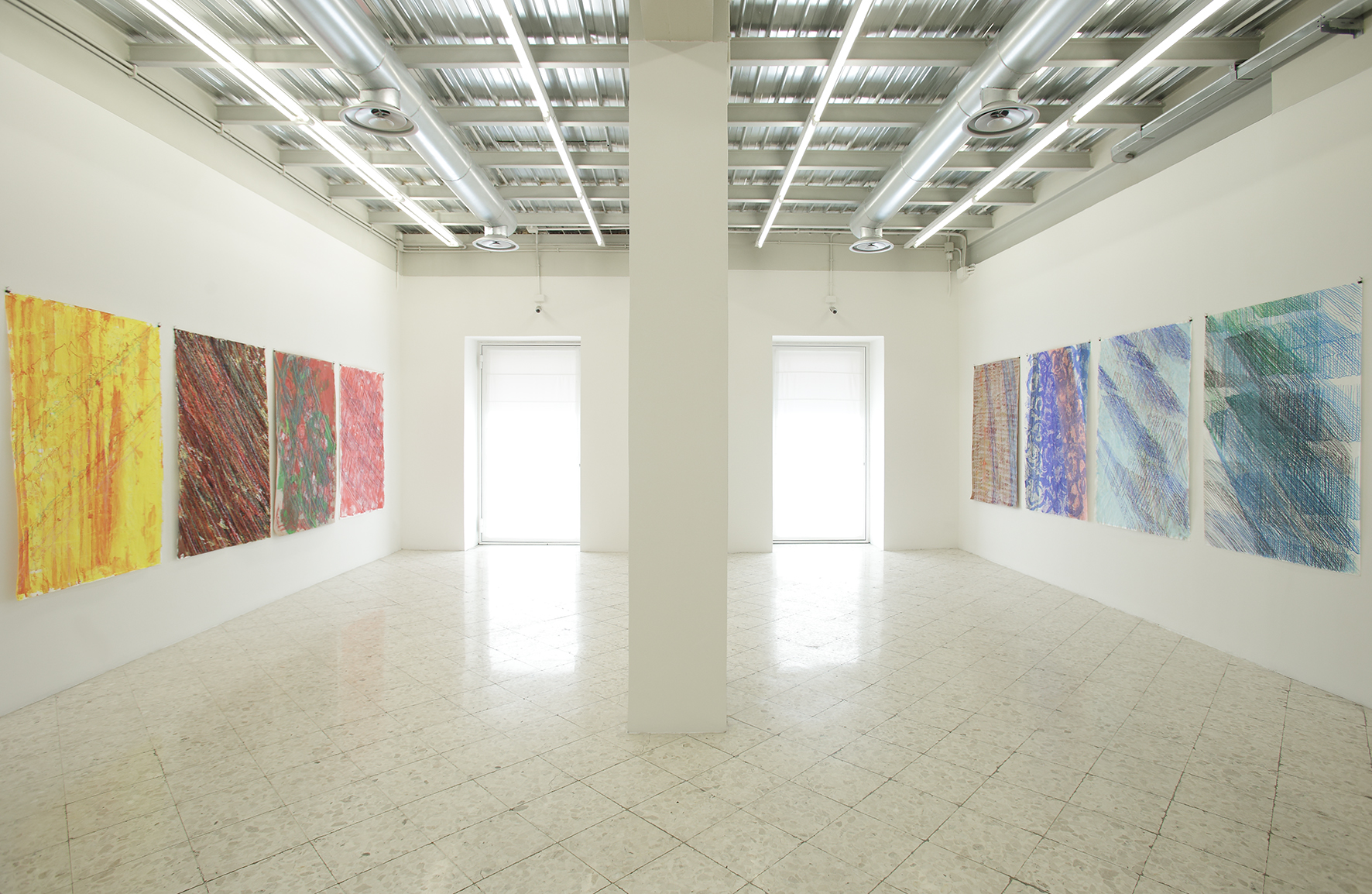 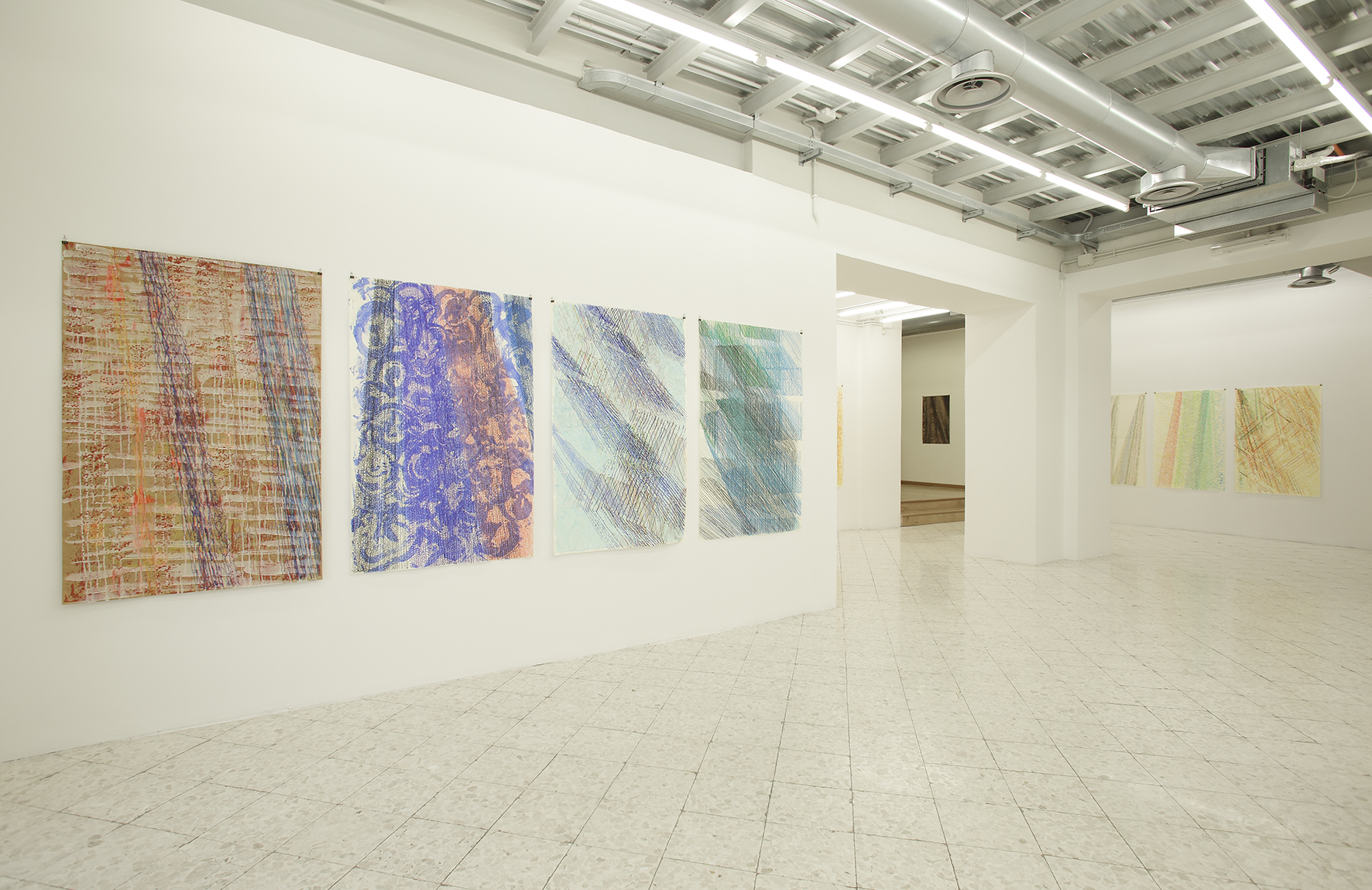 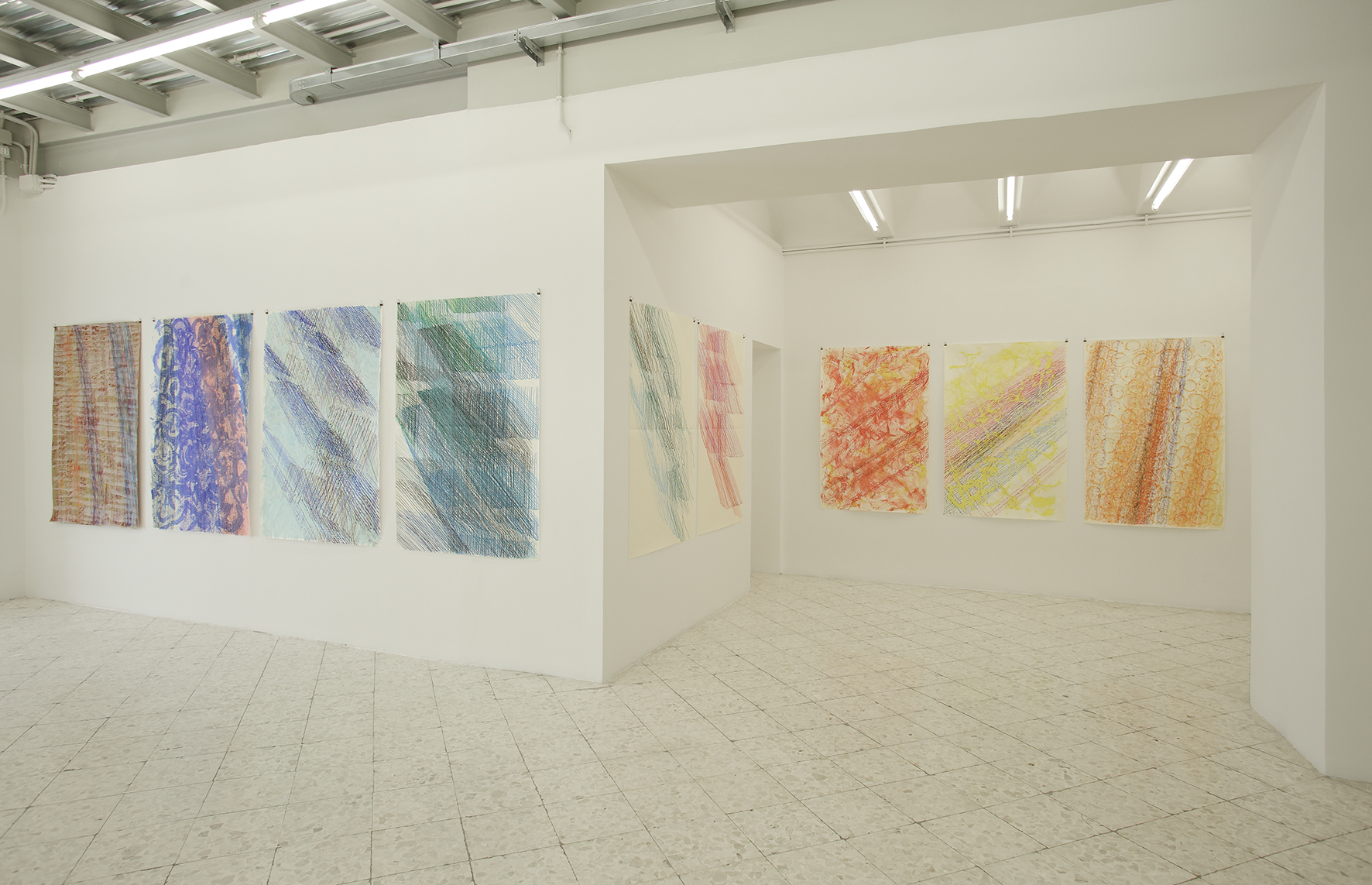 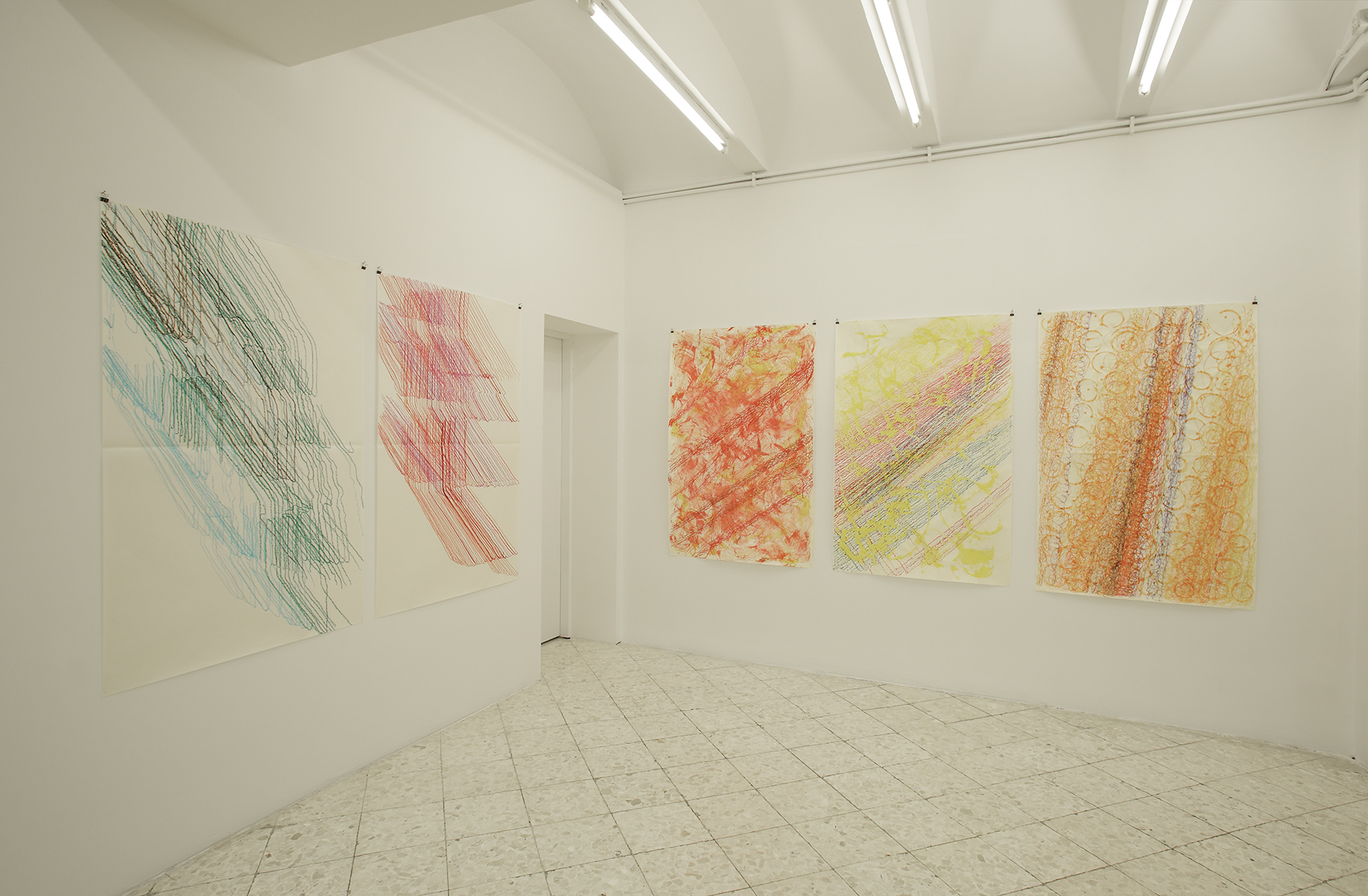 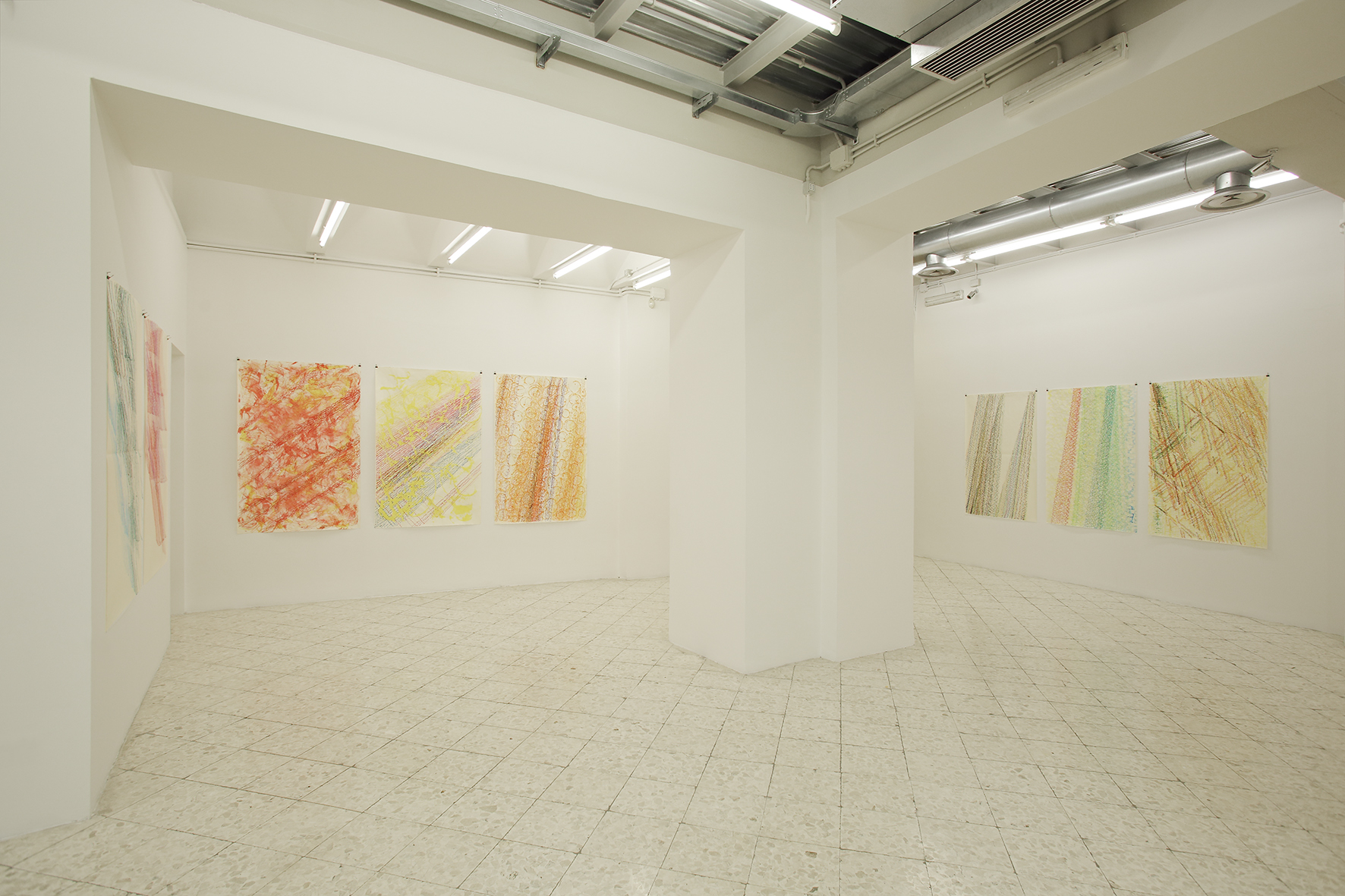 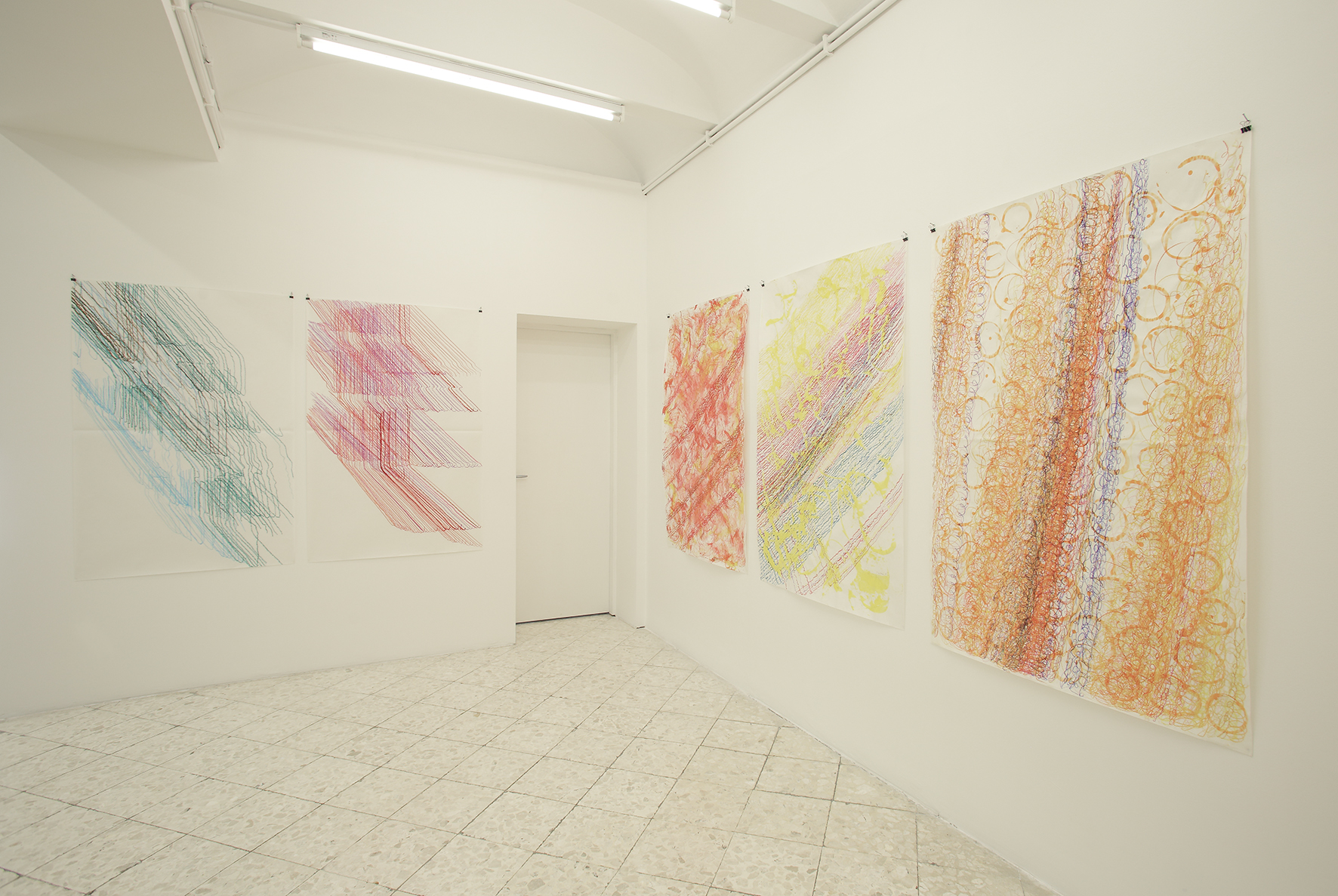 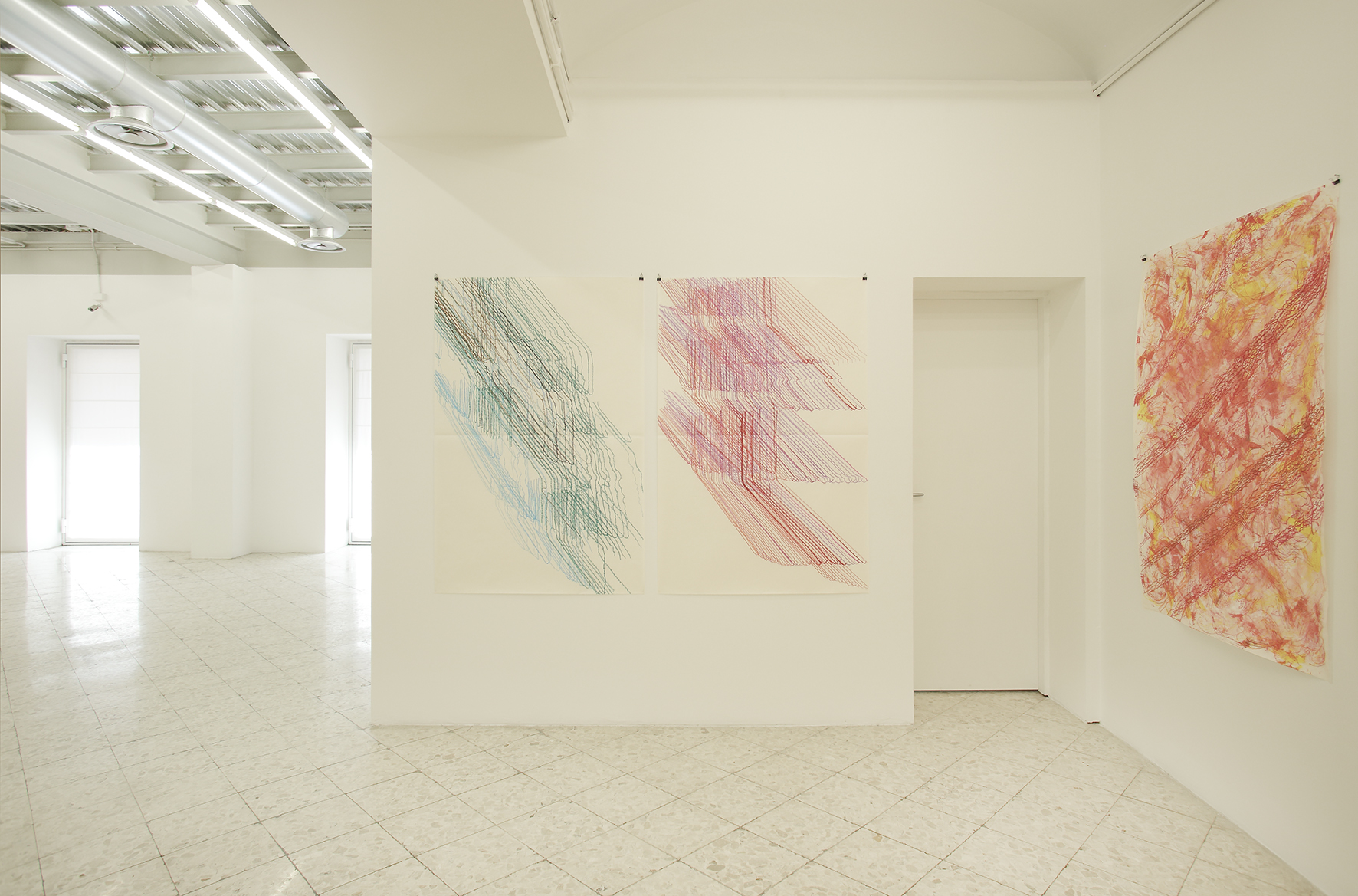 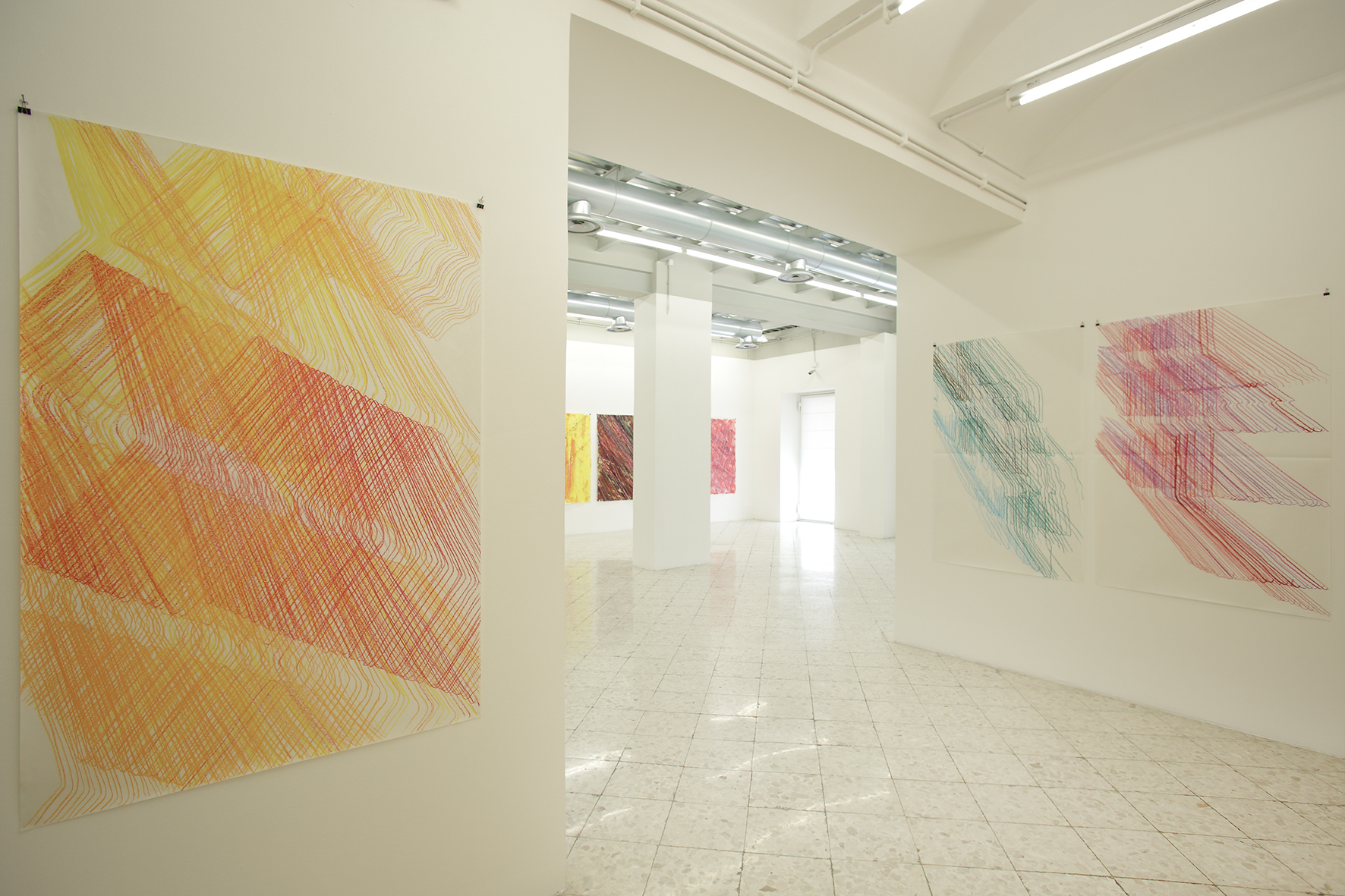 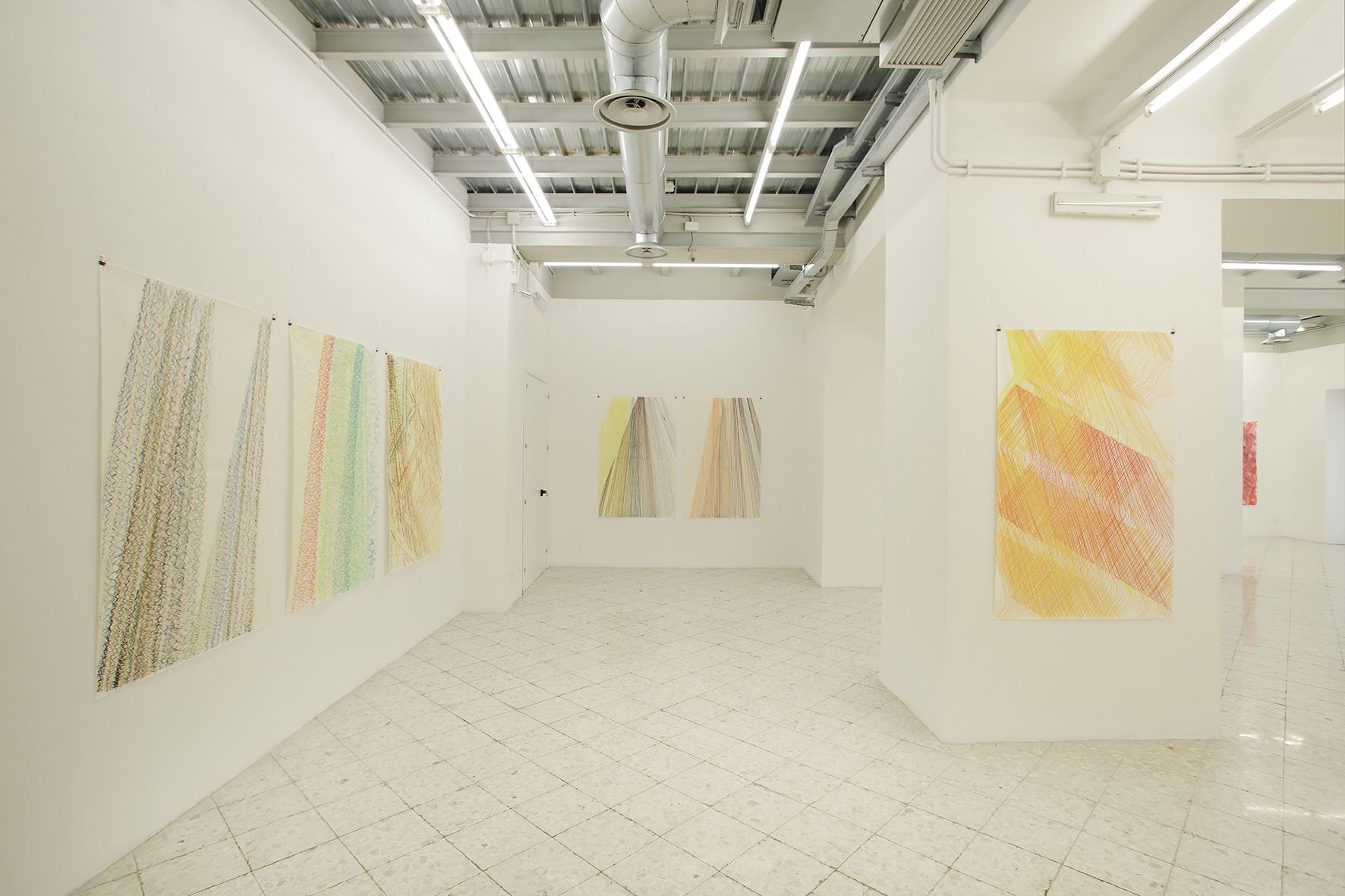 Carte Meridiane presents an unprecedented selection of works realized by Stefano Arienti in 2018. 22 are the displayed pieces, which are part of a body of work begun in 2012 and exhibited for the first time at Villa Croce museum in Genoa in the exhibition Stefano Arienti, Finestre Meridiane. Intersezioni con la collezione di Villa Croce dedicated to the artist in 2017, conceived by Ilaria Bonacossa and curated by me together with Francesca Serrati. On that occasion, about eighty works were set into dialogue with a selection of works from the museum collection, in tight relationship with the architecture of the neoclassical villa holding it, characterized by its white and bright interiors and by the passage of direct light through the enfilade of rooms, lit by windows facing the sea and the green surroundings.

As a matter of fact, the Meridiane (Sundials) were born because of the light and, like sundials do, they mark light variations, which were transposed by Arienti on sheets of equally sized white or buff-colored manila paper through the use of crayons and oil pastels, and, more recently, markers. Those papers are covered by colored tracks, scanning the passage of the light coming from his home or studio window, recorded by the artist who, like a camera, impresses on the paper the trajectories of the sun, interrupted in correspondence of the obstacles interposed. Marks are dense, they create articulated compositions and, like many previous researches of historical abstract art, have a root in the relationship with nature.  And with architecture. Indeed, their distinguishing feature are the straight marks, produced by the passage of the light coming from his home window and, concerning those works featuring some squares overlapped until nearly forming some 3D renderings, generated from the mutins of his studio window.

As for Meridiane, the artist puts into effect an image generating process, which recalls his folded papers and the early Turbine series, through a minimal sign that creates unexpected vibrations. The investigation on the very nature of images that characterizes Arienti’s work is here taken to its luminous matrix and moves from the will to let the light be his leader. Drawing with light, with creases, by sewing, by perforating, drawing with modeling clay: diverse are the processes that let the making of an artwork being analyzed through a nearly handcrafted manual skill, that does not aim for expression but it is the means through which expression filters, inevitably. In the Meridiane, that is transmitted by the color of the pastels kept by the artist on the table and chosen according to the composition rhythm dictated by the sun. It is a performative work, in which the gesture translating light into color does not allow any mistake, any erasure. The gesture is as fast as the passing of time, the drawing derived from it distill the action through the lines.

A practice born “to kill time”, as Arienti claimed, during a painting course held in 2012 at the IUAV, that initially saw the realization of some compositions on paper with geometrical or floral patterns made up with glues, colors, stamps, sponges, palette knives and eventually generated a series of papers shown first in Venice at Palazzetto Tito of the Bevilacqua La Masa Foundation (2012), then in Lugano at Primo Piano (2015), at Mars space in Milan (2017) and in the currently running exhibition at Sant’ Eustorgio in Milan. Across the years, the same papers have also become “backgrounds” for some Meridiane, a series not only born from immaculate surfaces but also from the relationship with preexisting color layers, thus creating a strong materic density in which painting and drawing coexist. Arienti seems eager to enter tip-toe into domains where he feels stranger by background (he who studied Agricultural Studies) and he makes experiments with the grace of a wise self-taught artist. The Meridiane series was born on the sly, often at home, as a representation of a living time that is inseparable from working time, some form of meditation that matures throughout the years, filling up the interstices, growing as a corpus in order to return in light on the occasion of the Genoese exhibition. And being that the case of a dialogue with a museum collection, which followed the previous examples of Museion, of Kartell museum and of the collections of the Musei Civici di Mantova, it saw the works themselves act, once overlapped, as a support, a wall prop for displaying other ones, by other authors. The rhythm, the density of the papers varied from room to room, with some more rarefied moments setting the Meridiane in the foreground. A grand installation conceived in response to the architectural space and from a reflection on display strategies, that seems to recall the legacy of Franco Albini, an important figure for the Ligurian city museology, who, not by chance, was a teacher of Corrado Levi, a reference figure for Arienti’s art education. I believe the exhibition at Villa Croce represented a significant moment for the whole Meridiane series, to a point that the selection of the works on paper, that included some experiments carried out using fresco painting technique, is held by the artist as a unitary corpus. (Other Meridiane had been exhibited in 2018 in Rome on the occasion of the solo show at Studio Sales).

Getting back on writing on them today, at a two years distance from that exhibition, allows to focus on the central role that the cycle has assumed within Arienti’s research. Like in the learning of a language, a dance or an instrument, an intense practice allows to improve the mastery of the medium, practice is what builds up a more and more expanded language.   Thus the marks of the most recent Meridiane get more complicated until assuming wavy and zig zag trends, or, as Stefano defines them, trills, returns and splitting of the sign occur and cover again not only the lines of window fixtures but the entire color fields of light. The background too looks more dense now, more developed, and together with the composition, always resulting from an immediate response to the occurrence of light, comparable to the improvisation of jazz music, open up to multiple variations, following, as Arienti says, “an idea of personalized matter, sought after in the attempt to suggest a freer approach to the images, going beyond what has become their use on screens and other digital devices.”